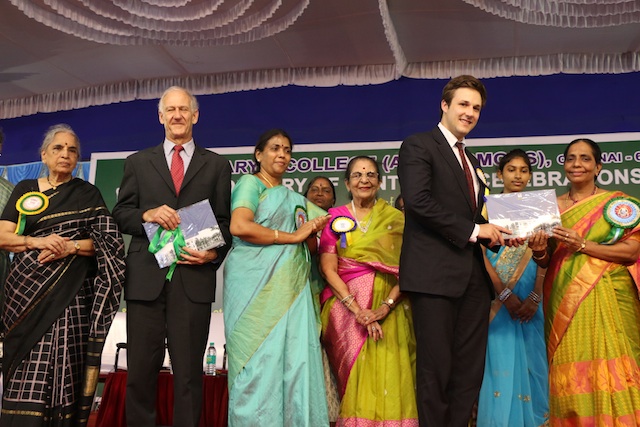 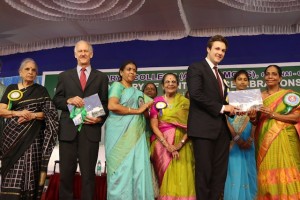 The curtains came down on the finale of the centenary celebrations of Queen Marys College ( Autonomous) on July 15 evening with the release of a special book by state minister Gokula Indira. Present on this occasion were members of the De La Hey family ( De La Hey was the first principal of the college who set up this campus from scratch), Dr Meena Muthiah, IAS officer Shanta Sheela Nair, both alumnae principal Dr Akthar Begum and historian V. Sriram.

The event was held in a temporarily erected, grand shamiana in the heart of the QMC campus.

Nithya Balaji who is an alumnae and also part of the editorial team which put this book together said that it contains rare photos and tells the story of the college is a breezy format.

The book is on sale at Rs.1000. It is smartly designed and printed. It can got at the alumnae association office on campus.

Earlier in the day, Tamil Nadu governor Rosaiah graced the valedictory function at the same venue and released another keepsake book – the centenary souvenir.

Many alumnae of the college attended the two functions besides a large number of the students.

A stupa erected in the college square to mark the centenary  awaits a formal launch. This is a donation made by Meena Muthiah, also a senior alumnae.