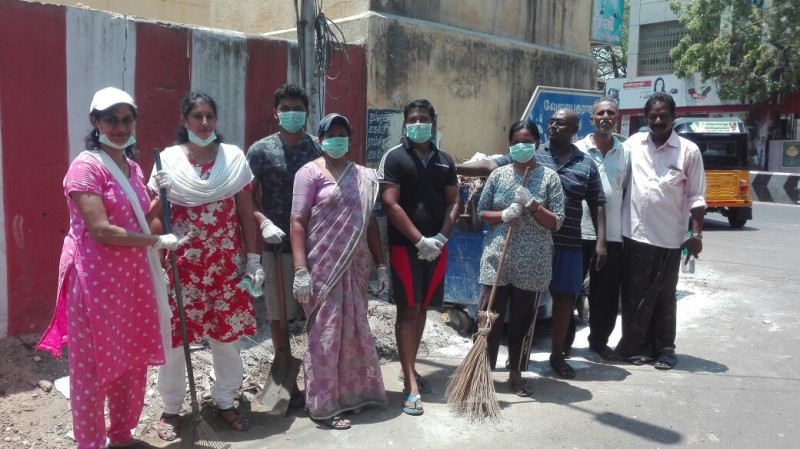 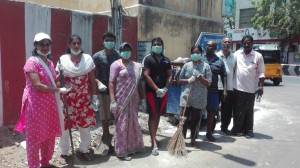 The entry into Raja Street, Mandaveli via Velayutha Raja Street has always been an unnerving one, the place has always been a eye sore for all. Overflowing broken bins and stinking garbage strewn on the street made it very difficult for the vehicles to enter and for people to walk without holding their breath.

Inspite of repeated complaints to the corporation the broken bin had not been removed and people would just shove the garbage bags anywhere in its vicinity, almost and always missing the bin.

Deciding that enough is enough, a group of residents from Raja Street got together on March 27, well equipped with brooms, shovels, gloves and masks, to clean up the Velayutha Raja Street entrance. They made sure to pick up even the smallest piece of garbage and dispose it in the prescribed bin only. Seeing the enthusiastic group, many residents and shopkeepers too joined in. After the clean up bleaching powder was sprayed all around the bin.

Seeing the effort and unity of the public, the corporation immediately sent a truck to take away the broken bin and the complaint that had been lodged two months ago finally got resolved.

Later to increase awareness about the need to keep a clean environment, the members of Raja Street Association, led by its president Kanti Neelamekam, requested the residents to join their door collection campaign and dispose garbage inside the bin.