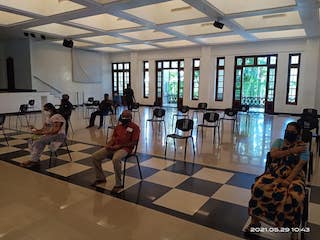 On Saturday, May 29, a vaccine camp was hosted at what is a posh kalyana mantapam in MRC Nagar.  GCC, the collaborator said only those above 45 years could take the jab.

In the three hours that the camp was open, some 30 people alone got the jab and some 170 doses had to be taken back by the medical team.

Herein lies the story of the vaccination process at the neighbourhood level. Ad hoc, narrow and dithering.

For some days now, GCC has been asking community bodies to host vaccine camps with its support. There are some 100 RWAs in Mylapore, mostly associations of apartments and less of colonies. The newly elected MLA has been trying to get this campaign going.

But the GCC, from recent experiences seems to be working on an ad hoc mode and its acts seem to indicate that the drives are not meant for the poor and youths now.

The MRC Nagar community heads have been working hard to impress on the GCC and others to have the jab for poor youths and those in the 45 plus category.  But on Saturday, the team at the venue refused to go beyond the mandate of the day – so 170 doses got returned.

No effort was made by GCC or the MLA or by the RWAs body to trumpet details of this camp which may have brought say 30/50 more people.

MRC Nagar community heads say that they had with them a list of 100 plus people of the zone in the 18 – 45 age group who work as maids, guards, odd jobs workers and collegians and had the GCC team budged, they would have got all the doses exhausted. That was not to be.

But at some GCC clinics, the staff take the liberty to give the jab to youths on some occasions. Nobody can explain this ad hoc process that goes on.

In some other GCC clinics, staff say they are now asked to go offices, campuses and construction sites and give the jab to all present.

In places like the kuppam zone of San Thome where vaccination is at its lowest, no effort has bene made to convince people on the jab and then, camps held to vaccinate them. Here, for now, many who fall sick remain home quarantined and the serious taken to hospitals.

RWA members who are working hard to get the vaccine provided to the community say they are a frustrated lot and moan the lack of transparency and mixed approaches ( example, some Rotary Clubs are holding camps across the city where all youths get the jab free).

“Why is the vaccine given to youths in some places and refused in others. This, none from GCC and from the MLA’s side can answer,” said a senior RWA leader on anonymity.