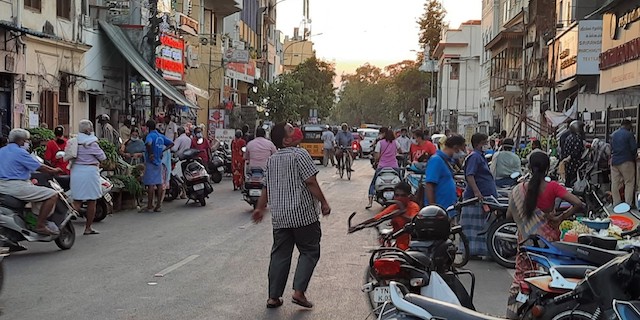 Many people have been critical of crowds gathering at the two gates of Sri Kapali Temple on prodosham evening on Sunday on the eve of the  long lockdown ordered by the state due to the pandemic intensity.

Remarks were made on the Facebook page of Mylapore Times which posted pictures.

At about 5.30 p.m. over 50 people were seen massing, mostly masked up but not distanced at both gates of the temple which are kept open for people to get a glimpse of the processions inside; temples are off-limits to people since late April.

On ordinary days, and specially after dusk, regulars stop by to pray and catch a glimpse of the lords. But Sunday saw a crowd and many people who saw photos of the scenes were displeased with the massing.

Around the same time, shoppers were aplenty on South Mada Street too.