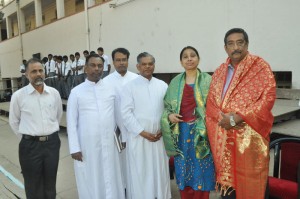 Ashwin is a past pupil of this school. He has been selected as one of the members in the India cricket World Cup 2011 squad.

The school and the alumni had a special programme in the school premises during the morning Assembly on January 19.

They presented Ashwin’s parents with a shawl (seen in the picture along with the Rector, HM and Vice HM and Administrator of this campus), as he was not present to receive it. Ashwin resides in West Mambalam.