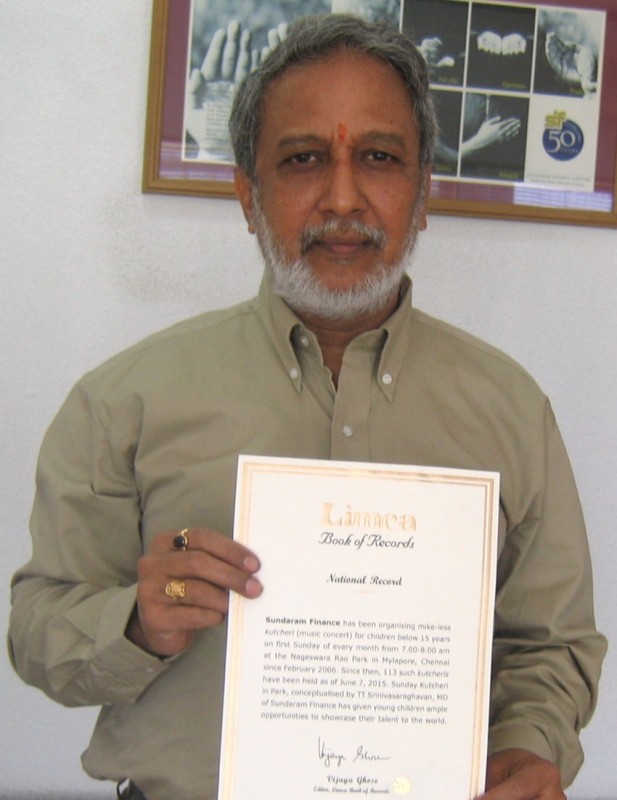 The monthly event – ‘Kutcheri in the Park’ organised by Sundaram Finance on the first Sunday of every month at Nageswara Rao Park, Mylapore has entered the Limca Book of Records with a national record for the longest open air mikeless kutcheri for children.

‘Kutcheri in the Park’ completed 10 years with the Kutcheri earlier this month. TT Srinivasaraghavan, MD, Sundaram Finance Ltd.,(seen in the picture) received the certificate from the Limca Book of Records on Monday (Jan 25) .

According to the Limca Book of Records, ‘Sundaram Finance has organised over 100 Kutcheris in the Park during the 10 year period with children from overseas including from Middle East and the US also having participated in the event. The event has given young children ample opportunities to showcase their musical talent to the world.’

TT Srinivasaraghavan, MD, Sundaram Finance said, ‘It is gratifying that this event has been acknowledged as the longest running open air mikeless kutcheri in the country. When we launched ‘Kutcheri in the Park’ 10 years ago, the idea was for this to be a launch pad for young budding musicians. Over the last decade, it has served as a platform for over 1000 children to showcase their talent in an informal park setting. For many of them this has been their first kutcheri and a number of these young ’Unsung’ children have since moved on to perform in sabhas and won laurels in the carnatic music field.’

Sundaram Finance has been organising mike-less kutcheris since February 2006. This event is open for children aged 15 years and below. Every month, children, selected by an audition committee at Sundaram Finance, perform in the open environment at the park.

To register for the audition – email sundaykutcheri@sundaramfinance.in.