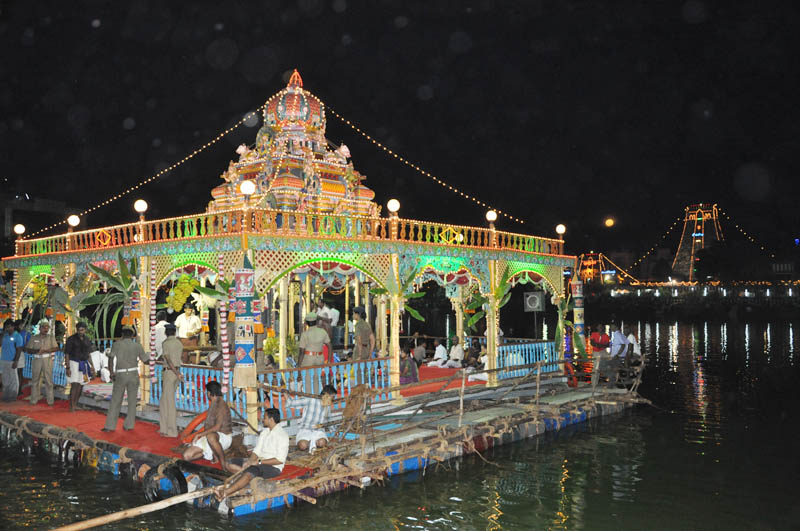 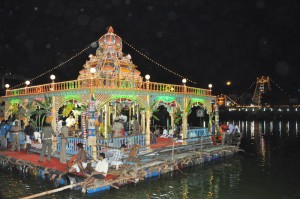 The roar of peak hour traffic on R. K. Mutt Road fades out the ring of the recitation of the Vedas which floats in from the tank of Sri Kapali Temple.

It is the second evening of the annual teppam fest here and though the banks of the tank are lit with tubelights and serial lights, it is the rising new moon in the east that makes this picture enchanting.

The main gate on the western side of the tank is opened for special guests, hangers-on and mediapeople to get inside the tank and await the float as it stops here after each round.

Vocalist K. Gayathri adorns her hair with flowers as she and her musicians prepare to step into the float.

On the last three rounds of the float, Gayathri offers her musical prayer to the Lord, who looks up at his devotees in simple resplendence. The image is positioned well so that when the float does the rounds, most people who are sitting on the steps of the tank or standing on its edge get a darshan.

Volunteers here tell me that the vimana created for the float is a replica of the one in the main temple.

Mylapore’s police regulate the frenzied entry into the float and since the water pumped into the tank for this celebration is full, the policemen on patrol in the waters and the volunteers on the edge of the float keep an eye to ensure there isn’t a slip or a cry.

Moving the float across the water-filled tank is a demanding job. For those sitting inside the float and gazing at the Lord, it is a joy ride of sorts. From this angle, you get to take in faces filled with faith and devotion – of people seated on the steps of the huge tank, seated in the dark and framed by the serial lights.

It is 9.35 p.m. when the float comes to a halt after seven rounds on Wednesday. As the priests and volunteers prepare to lead the procession of the Lord back to his abode in the Kapali Temple, the new moon has risen into the skies, leaving behind the neon lights of Rasi Silks and NAC Jewellers.

Click here to watch the photos of the teppam.

You can also watch videos of the teppam here.