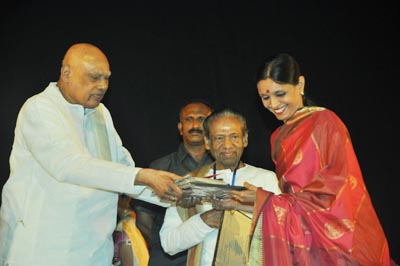 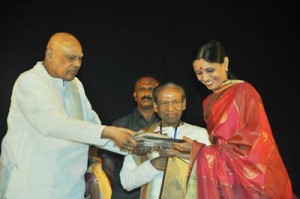 The Governor was in Alwarpet on Wednesday evening, November 14 – the day after Deepavali when there was a certain dullness all around, a certain hangover some would say.

Governor Rosaiah was at the Sadguru Gnanananda Auditorium of Narada Gana Sabha on TTK Road as chief guest at the silver jubilee celebrations of ABHAI – Assn. of Bharatanatyam Artistes of India – which has its base here.

Alongside him was a former Governor, Gopalkrishna Gandhi, now Chairman of Kalakshetra. 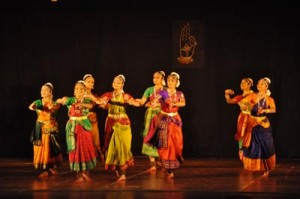 This was an occasion to honor gurus and artistes – guru Kalyanasundaram of Mumbai, Kalanidhi Narayanan, Ranganayaki Jayaraman, Adyar Gopinath and dancer Srikanth.

It was also a time to remember the services of ABHAI’s founders and supporters. Many of them are dance gurus and they were be hind the short, colorful choreographies that were presented this evening.

ABHAI is now led by dance guru Chitra Visweswaran who is based in Alwarpet. It is spreading its wings, which has been long-delayed with a unit in Coimbatore and its led-dems/workshops are now better sought.