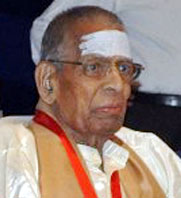 Celebrated violinist M S Gopalakrishnan passed away this morning at about 2 a.m. He was admitted to a local hospital on Wednesday afternoon when he suffered the effects of breathlessness. He was 82.

This exponent of Carnatic as well as Hindustani music lived in Apparswamy Koil Street, Mylapore and was seen at some events during the recent December Season. He was even decorated with an award by Indian Fine Arts Society at a hall in T. Nagar. He was in a wheelchair at this event but was alert and chatted with friends and rasikas.

He is survived by his wife, daughter violinist M Narmadha, violinist son Suresh and another daughter Latha.

MSG, as the vidwan was fondly known belonged to the celebrated Parur lineage in Carnatic music and was on stage as he got into his teens. He went on to take centre stage soon and was known among the best violinists, the others being Lalgudi Jayaraman and T N Krishnan, of that generation.

He was decorated by the nation with the Padma Bhushan and Padma Shri awards and with the Sangita Kalanidhi by The Music Academy, a prestigious award.

MSG was active as a artiste till the end, performing by himself or with daughter Narmadha beside him.