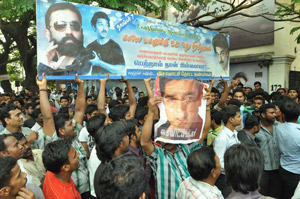 Fans of actor director Kamla Haasan staged a protest outside his office at the Alwarpet junction on Wednesday, demanding that the state banned film Vishwaroopam be allowed to be screened in the theaters.

The demo was held during the day and a large number of fans took part in it. They raised slogans and held up placards in support of the film.

The state had banned the screening and on Wednesday, a Bench of the Madras High Court stayed an interim order of a single judge lifting the ban on the film.

This triggered strong reactions from the fans who upped their demo in Alwarpet, at the Eldams Road junction.