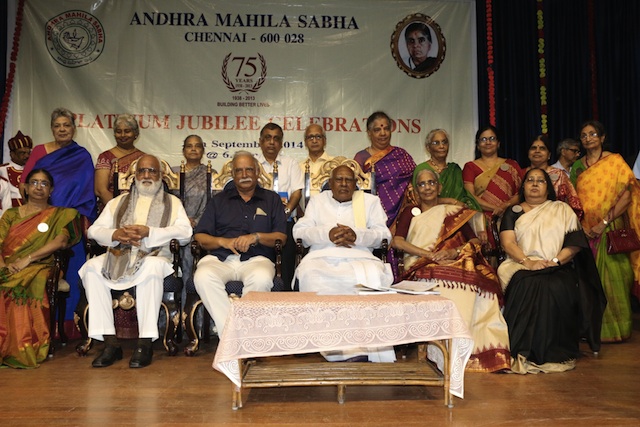 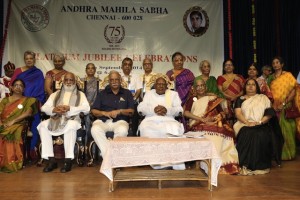 State governor K. Rosaiah was the chief guest at the finale of the platinum jubilee celebrations of Andhra Mahila Sabha, a institution for social service set up by Durgabai Deshmukh, community service leader, freedom fighter and activist. At a function held at the T N Rajarathinam Kalai Arangham, R. A. Puram on Sept.29 evening, it was a time to honor past presidents ( two of them) and long serving life members for their service. Other guests at this event were union minister Ashok Gajapathi Raju and Nawab Md. Abdul Ali, prince of Arcot. In her address, Sabha president K. Lakshmi outlined the short history of AMS and the milestone projects it had founded and carried on with some of which were the first of their kind in India. Vice presidents P Vimala and Usha Kanda made the opening and thank you addresses. The AMS has two major campuses in the city, both in this neighborhood. The hostel-training centre on Luz Church Road and the hospital-rehabilitation and old age homes campus called the Durgabai Deshmukh Hospital, opposite the MGR Janaki College for Women in R A Puram. AMS committee members and well wishers from the city and from Andhra Pradesh where AMS also has many service centers including a 200-bed hospital were present at this simple, smart event. Dr Abdul Kalam, former president of India had launched the jubilee events in Hyderabad last year.