Mary Kalyani Daniel passed away on Mar 12. She was 91 years old. She was a teacher at Roasry Matric School. This is a tribute to Mary Kalyani written by her daughter Vasantha. You can reach her at 24983112. 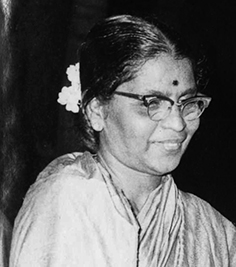 Kalyani was born and brought up in Mylapore / San Thome. She grew up in a large joint family of several girl and boy cousins. She became Kalyani teacher when she started teaching at Rosary Matriculation School sometime in the late 1950s or early 1960s.

The first house, in the early 1950s, where she started her married life was on the beach, at the end of D’Monte Street in San Thome and next to the Fishing Village, called Doomingkuppam.

As a result of living there she befriended the women from the fishing village nearby and who continued to keep in touch with her even after the Police Headquarters (where Mr.Daniel worked) moved the family to a larger house on Rosary Church Lane.

To that house the fisherwomen would come all the way from Doomingkuppam and Kalyaniamma as they called her was their bank. They would bring crumpled dirty one rupee notes for her to keep and which she would keep in separate tin boxes for each of them, including old John Peel cigarette cans from an older relative. The fisherwomen, after a lapse of time, when some money had built up in the tin cans, would come and take that as their savings and this meager amount they had saved up it was theirs to use as they wished.

One fisherwoman who became a leader of the group was Rajam and she was such a devoted member of the household and in later years when the children grew up and travelled and came home she would bring the choicest, juiciest sea food for Kalyaniamma to make tasty dishes from the fresh sea food that Raja brought to her.

Kalyaniamma’s prawn pickle was legendary and she would make it and gift to friends and people in the family and all of whom would vie for the recipe. There was community around and one shared the little joys and the hardships of lives in those days, a far cry from today.

Then in between all this, there was a friendship with  Dr.Vijayalakshmi. Kalyani got involved in Dr.Vijayalakshmi’s electoral politics and became an assistant to Dr.Vijayalakshmi, the PSP leader, who contested unsuccessfully the 1957 and 1962 elections.

It is after all these activities Kalyani went to Rosary Matriculation School first to help them with craft. She always believed that women should keep themselves occupied and busy.

Later on when she was asked to substitute for a teacher in the first class is when both she and the school discovered her natural talent as a teacher of small children and though she was never trained formally to be a teacher, gradually became a legendary First standard teacher and taught almost two decades. During her teaching career she was given the State’s Best Teacher Award in 1975.

Later, and largely at the pressure of her children, she stopped teaching for a while and then went back to teach – both because the Sisters who ran the School wanted her back and because she loved teaching. Thus she landed up as a teacher for almost thirty years teaching three generations; many times teaching the daughters of her previous students.

In her older years she was addressed by neighbors and younger women friends as Kalyaniamma. She was a great supporter of women’s independence and went out of her way to support and encourage young women to strike their own paths in their lives. When Mr. Daniel retired the family moved to a small street house on Thandava Raya St. In this small house she many times sheltered young women who needed support as young women aiming to be independent.

Kalyaniamma held strongly to the view that as ordinary middle class people, we need not do great acts of philanthropy and charity, but always remember to do small acts of helping others, small acts of charity and tried in many ways to imbibe this in her children.

She passed her final days at the Mother Joseph Vianini Senior Citizens Home where she was lovingly taken care of by the nuns there. She was bid farewell on Mar 13 – not only family, friends but old students and people of different communities attended the funeral at San Thome Cathedral. She was later buried in the same grave as her husband R.D.Daniel at the Quibble Island Cemetery.