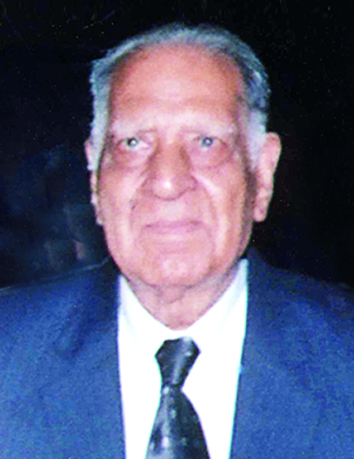 Yograj Bhasin passed away on July 20. He was 90 years old.

Yograj was born in Sialkot, Pakistan in 1925. He lived in Lahore, Pakistan till he completed his engineering education. His father,Dheenanath was a lawyer with the high court there.

Yograj had a passion for driving – from a very young age, he loved to drive bikes and cars. He was, actually, a better driver than he was a student. He was always fascinated by planes too. This fascination pulled him towards aeronautical engineering after school. He compelled his parents to let his pursue this field.

After partition, the family moved to Delhi. Dheenanath practised law there too. He was the deputy custodian recuavue properites – helping people who moved across the border with property claims to be reimbursed in India. He was an honest person, so much so, that he did not reclaim his own properties. Later, he went on to become an advocate in the supreme court of India. He even fought in some famous cases – Lala Lajpat Rai, INA to name a few. His wife Bhagvati was a social worker. She was an active volunteer with blind association and Arya Samaj. She was imprisoned during the freedom movement in India. Yograj was then four years old. His younger brother was a baby of one year. Bhagvati took him to jail with her.

After completing his engineering, Yograj learnt flying and was part of the Flying Clubs at Jalandhar and Delhi and later Damroli Allahabad. But, once while flying, he had an accident, because of which he was grounded. He as angered by this and gave up the Flying Clubs. But, during partition, Yograj worked as a co-pilot and also doing  mechanical fixes for recuavue flights at Delhi and Srinagar. On most days, he would fly three or four times.

After quitting flying, Yograj decided to join his uncle in Chennai, who was a stockist for ICI paints. He worked with his uncle for a few years and then started his own business in 1953. Then came marriage to Nirmal, in 1955. Nirmal was also born and brought up in Lahore, moved to Bikaner during partition. Her family owned beautiful farms and property in Lahore. Her father died soon after the move to India, not being able to deal with the loss of the property. Nirmal then moved to Delhi to live with her elder brother, who was working there.

Yograj ran his business till 1978. He faced some losses, so decided to quit and started working with Gujarat Steel Tubes in Chennai. He worked there till he retired in 1985. He was a good singer, a helpful person. Yograj and Nirmal celebrated their 60 wedding anniversary on March 5, 2015.