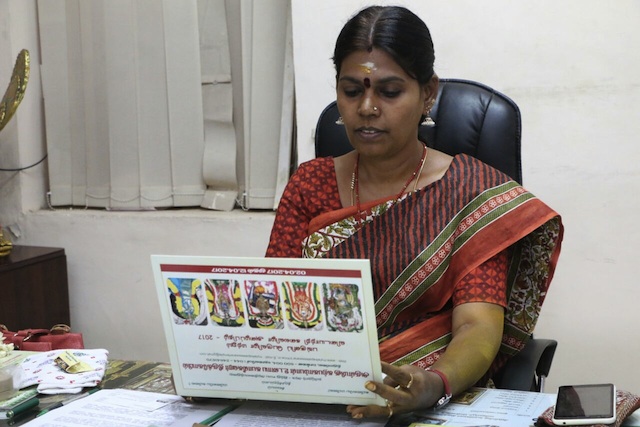 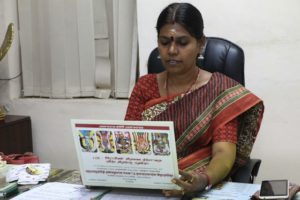 Security of devotees, traffic management and avoiding food wastage at annadhanam time are the priority of the temple managers, Chennai Corporation and local police during the annual Panguni festival at Sri Kapali Temple in Mylapore that starts on April 1.

(Here is the schedule)

Executive officer and deputy commissioner of the temple, D. Kaveri told the media at the temple office this afternoon that while security watch towers will be set up on the mada streets, cameras inside the temple ( some 20 plus) and outside will record movement on all days of the fest. ( Kaveri is seen in the photo here)

Police are also planning to allocate spaces on the mada streets, a limited number where donors can provide free food and drink to devotees on the arubathumoovar day when the temple attracts the largest number of people all through the day and into the late evening.

Chennai Corporation staff has been asked to clear the streets of food and other refuse and be proactive near the annadhanam spaces so that food is not dumped and stamped on here, a regular and woeful feature of the festival.

Police will soon announce the spaces where annadhanam donors can locate themselves.

Medical aid camps will be set up at a hall opposite Rasi Silks on two days of the fest when the crowd is very big and SOS calls of fainting, injury or dehydration have to be handled.

Metro Water is also being asked to set up drinking water tanks on the mada streets.

Mobile toilets are also to be stationed here while the Corporation one at Mangollai will be cleaned and set up for better use.

Kaveri said that during her time in office she arranged for repair and restoration of all 42 vahanams.

You can read daily reports and see videos / pictures of the fest at our Blog here.