There are short but interesting phases in the Panguni celebration at Sri Kapalai Temple that get lost n the color and buzz of the big rituals.

Wednesday night’s ‘Thiru Oodal’ ritual was one such.

On the final day of the festival, it was time for “Pandam Pari Vizha” followed by an interesting depiction of “Thiru Oodal” between the Lord and goddess Karpagambal.

A melodrama was acted out though it lacked the spirit of the original.

“Thiru Oodal” is all about Parvati’s anger on why the Lord carries goddess Ganga on his jata. And she expresses her anger by going back to the temple all alone, almost. The Lord asks Nandi to call upon his best friend, Alala Sundaramurthy Nayanmar, to pacify Ambal and bring her back.

Sundarar sings a pathigam at her doorstep, worships her and informs that the Lord is waiting for her. She gives an angry reply complaining that the Lord wears a serpent, attracts rishi pathnis, and takes the form of Mohini; and on the top of it, resides and dances in Mayanam, wearing an elephant skin!

Sundarar is sent back; he is n the double and conveys the message verbatim.

This entire story was enacted in Sannithi Street, as one hundred-plus people gathered and doubled up to get closer to this ritual and the recitation by the odhuvar of Kapali Temple.

They are called upon by the Lord and given a ‘Parivattam’ from the Lord’s side symbolizing them as Sundarar. The senior odhuvar’s recited the ‘Thiru Oodal Puranam’ which is in vasana nadai, or dialogues.

The Lord’s reply is relayed back, and Parvati becomes even more angrier. She asks whether Sundarar is returning a favour to the Lord by becoming a messenger, and her friends throw “poochendu” “punugu” and “javvadu” on him; Parvati now says she was the one who saved the Lord when he consumed the Halahala poison.

The Lord listens to this message and cites the example of how Ravana recited “Sama Veda” to pacify the anger of the Lord once upon a time; and asks them to return back to his consort and perform Sama Vedha adhyayana.

Listening to this, the goddess calms down and returns back to unite with the Lord. And the couple finally enter the temple together. 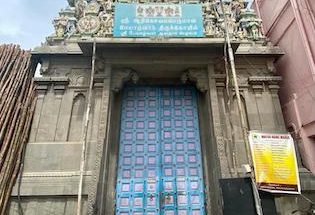 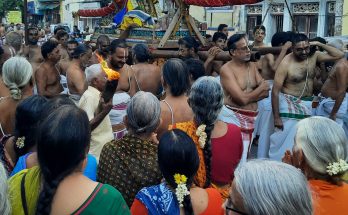 Pey Azhvaar visits Thiruvallikeni, after a two year break due to pandemic