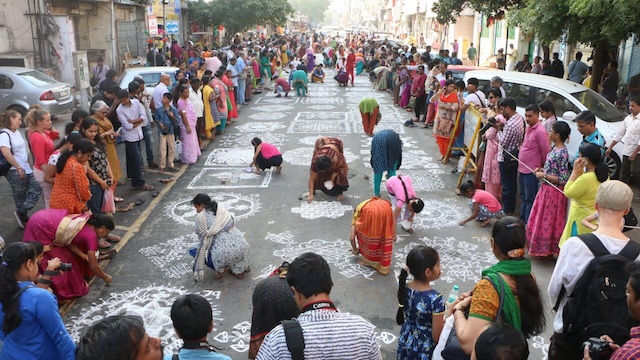 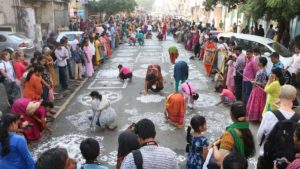 The 2018 edition of the annual Sundaram Finance Mylapore Festival had a rousing finale on Sunday, January 7. In the Sannidhi Street quadrangle where the main stage shows are held, the two big shows of the day had some 1000 people sitting here to enjoy them.

First, a bunch of city-based professionals who have been learning folk dances in the city ( at an Alwarpet office space) the past 7 odd years performed on the stage, guided by their guru Kannan Kumar and his son.

Their intense dance – including oyilattam and tappu-attam – got many rounds of applause from the big audience.

And the finale was a concert of the hits of the Tamil films of the 70s, mostly Illaya Raja and some MSV songs. Music director N Kannan and his musicians and singers presented over 20 songs on Sunday night and kept the large audience entertained and easy in the open air when the current chill of an extended winter time, so rare in the city hung all around. It was 10.30 p.m. when the curtains came down on the show and the 2018 Festival.

The evening on Sunday had begun with the second kolam contest in which some 90 people, including a few men took part – 15 prizes were given to the best designed kolams and once again, North Mada Street was turned into a carpet of kolams.

The big turnout for the Walks continued on Sunday – some 70 plus people tagged on to architect Tahaer Zoyab on his ‘Houses of Mylapore’ Walk that began at Sannidhi Street while some 50 people joined Padmapriya Bhaskaran on her ‘Saints of Mylapore’ walk that began at a shrine behind Hotel Karpagam on South Mada Street and and ended at San Thome Cathedral.

Later in the evening, over 25 children and their parents sat with Pradeep Chakravarthy to listen to and interact with stories on Mylapore and Sri Kapali Temple, inside the temple campus.

The Facebook page of Mylapore Festival has lots of videos and pictures.