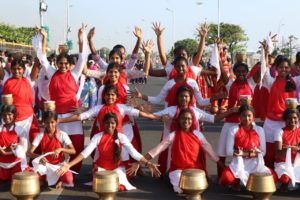 Rehearsals for the Republic Day parade to be held on January 26 are being held early in the morning on Kamaraj Salai.

Besides members of India’s armed forces, Chennai city police and para-military groups, the parade will also feature school and college students in the march past, bands and groups presenting music and dance recitals.

Traffic is diverted when the rehearsals are on.

On Republic Day morning ( January 26), people who wish to watch the parade may do so by lining up on either side of the the road, away from the space around Gandhiji statue.

The parade starts from the Light House end and move towards Vivekananda Illam.

Photo shows students of Queen Mary’s College, Mylapore who are presenting a medley of folk dances in the parade, taking part in the rehearsal on Monday morning.