The ‘Shrivatsa’ is a specially designed installation raised inside the campus of P. S. Senior School by the Class of 1993.

A large bell that is part of the installation catches the eye of anybody who walks into the school.

The installation symbolises the bonds that exist between teachers, students and staff on this campus.

And so, on special occasions the alumni of 1993 arrange to place flowers at this installation.

On December 15 last year end, flowers were placed here to remember the school’s science teacher Seetha Ganesan on her first death anniversary. And the bell was rung in her memory. 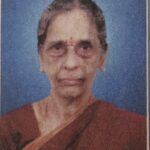 Vembu Shankar, Indian Army veteran and a member of the ’93 P. S. Senior batch says that the batch consisted of 150 students when it passed out and they pooled in money to erect this installation in December 2018.