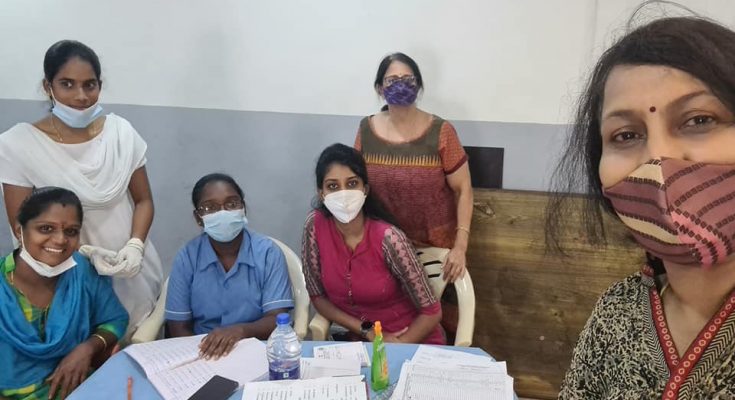 On March 29,  the community of Jains Sagarika in MRC Nagar organized a corona vaccination campaign and camp successfully.

This campus houses some 100 residents

The core team contacted officer Yuvaraj of Ward S I , requesting him for the camp .
He promptly agreed and immediately asked the team to gather 100 people from all walks of life .
The age limit given was 45 plus with co-morbidities .
Messages were shared on the community’s women’s Whatsapp group about the camp . The help of the campus association  was sought to motivate residents to.participate.
Neighbourhood apartment complexes  were also informed about the  vaccination.
camp .
Drivers , maids, cooks, security  staff, local  vegetable vendors were informed too.
The association allotted the campus gym premises for the camp with seating arrangements for all with adequate social distancing .
On the appointed day, the GCC medical staff landed up and started the vaccination.
The nurses wrote down all the details of each resident and staff , while another gave the shot .
The doctor patiently answered  queries of people who attended and approved them for the vaccination.
An ambulance was kept on standby in case people developed any medical issues . Paracetamol was given to all recipients.
The campus team provided water and juice to people who needed it .
Many people from neighbourhood institutions walked in to take the jab.
The project was a success due to the Jains Sagarika Association’s collaboration,  arrangement and instant approval .
Sudha, Prabhakar and Sunitha Suren and Priya were part of the core team that executed this project.
If you too want to organise such a similar camp, talk to Priya Ramkumar – 9600047586
– Report and photo by Priya Ramkumar