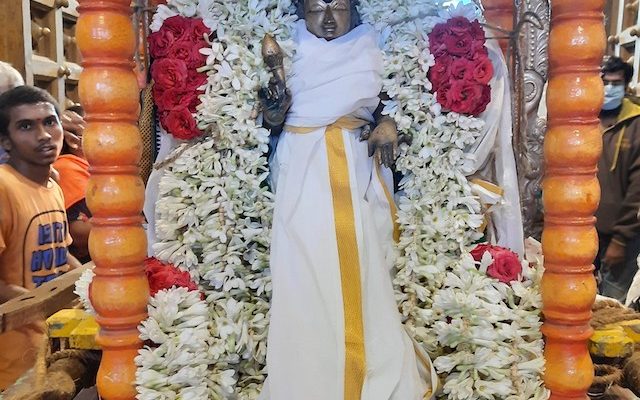 It all seemed fine with the grand Thiru Kalyanam on the tenth day of the Panguni utsavam at the Kapaleeswarar Temple on Sunday evening. 24 hours later as it so often happens with couples, Karpagambal made a strong protest to Kapaleeswarar holding the Ganga (a lady) secretly atop his head.

The day after the curtains come down on the utsavam is the one when, during the Pancha Moorthy procession, the Sripatham make their collections for their 10-day services. And it turned out to be a really long drawn one.

While the procession on a simple pallakku started at 7.30pm on Monday evening, the return to the chariot side did not take place till it struck 10pm. And when they did make it back, all of a sudden Karpagambal shot past Kapaleeswarar into the 16-pillar mandapam while the lord stayed back in shock near the chariot at this sudden hasty retreat by his consort.

Kapaleeswarar pulled in his friend and one of the four famous saint-poets, Sundara Moorthy Nayanar, to check the reason for Ambal’s anger and to bring her back.

For the next half hour or so, this  episode from Thiru Oodal Puranam was played out between Ambal at the 16-pillar mandapam and Kapaleeswarar at the chariot side with Sundarar going back and forth between Ambal and the swami  trying to play a conciliatory role 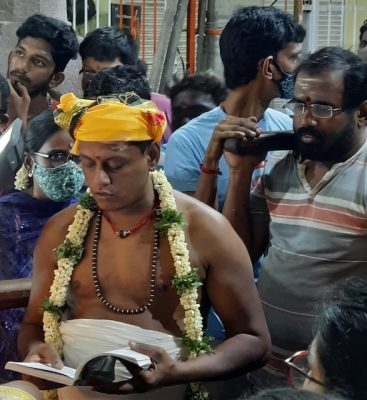 Late on Monday evening, Othuvar Vageesan, with a beautiful yellow parivattam tied to his forehead by the priest, anchored the enactment presenting Ambal’s message to Kapaleeswarar and his defense to Ambal.

While Ambal reasoned that she had borne with patience many things in the past but this one of him having Ganga secretly in the head was unpardonable, Swami asked Sundarar to explain to her as to why he had got tanned waiting in the hot sun. Finally Swami asked Sundarar to play out the Saama Vedam before Ambal to cool her down reasoning out that even Ravana did so after he was crushed under Mount Kailasa by his big toe and was then blessed with special boons.

After three rounds of conciliation, Ambal finally relented and made her way to the chariot side to take her place beside Kapaleeswarar much to the delight of the small bunch of devotees who came specifically to watch the enactment of this episode.

Shortly after 10.30pm, the Pancha Moorthy idols made their way into the temple.

Tail piece: Tuesday will see the return of all the external priests who had come here to support the Utsavam and the bringing down of all the temporary structures inside the temple complex as well as till the chariot.

Photos: 1. Sundarar the mediator of the fight between Ambal and Swami. 2. Othuvar Vageesan who anchored the enactment of the Thiru Oodal episode