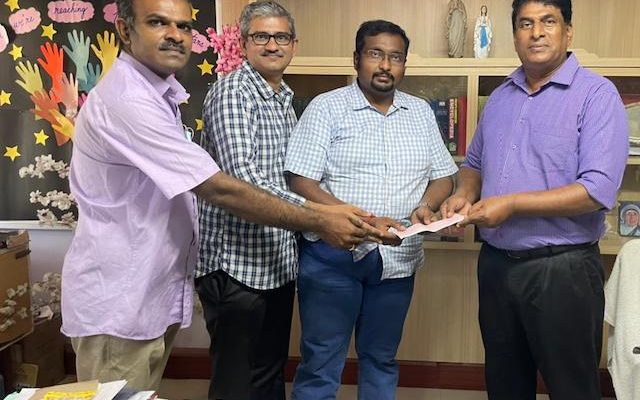 The alumni group of the 1992 batch of San Thome Higher Secondary School has made a large contribution now to fund the studies of a group of economically poor students of this school.

Recently, a few alumni members handed over a cheque for Rs.1,80,500 to Brother Susai Alangaram, correspondent of the school which is managed by the Montfort Brothers of St. Gabriel.

And since there are a few more applicants from this school and from the Montfort Academy, a Matric school run on the same campus in San Thome, the 1992 batch hopes to raise more funds for this purpose.

“Due to the pandemic lockdown and regulations we could not personally scan the applications and meet the boys who needed the funds so we funded the boys whom we supported last year,” said alumni Karthikeyan who resides in Mylapore.

The 1992  batch now has some 150-plus members, some 25 living abroad and has been actively linked up on its WhatsApp group. It meets twice a year locally, in January and in September when the ‘boys’ settled in the USA and in Europe visit Chennai.

“Many applicants’ families have been severely affected by the pandemic, some have lost the bread-winner, ” said Karthikeyan. “Since ours a large alumni group raising the funds has not been difficult.”