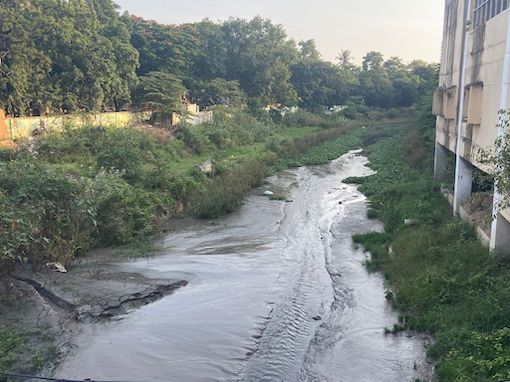 Who is responsible for letting out waste from a private land into the Buckingham Canal in Mandaveli and polluting it further, an act that took place this weekend?

Fingers are pointing to a well-known builder who is constructing apartments at the Venkatkrishna Road junction near Mandaveli MRTS rail station.

Residents of this area found on Sunday that a stream of sludge water and mud was flowing into the dirty Canal close by. They later found that this sludge was being let out via a secretly-laid pipeline from the plot being developed, on to the banks of the Canal.

Complaints about this pollution were raised with civic agencies and this morning, some workers were seen trying to clear the sludge as if to let the water in the Canal flow. There are only pollutants in the Canal.

It is not clear if the flats’ promoter arranged for the cleaning up or GCC did.

This builder is already facing flak from the local community for carrying out civil work at midnight and in the early hours, polluting the colony. Even local police checks have not stopped this act, allege residents here.