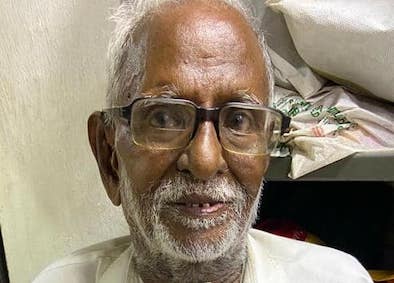 One of Mylapore famous tailors, Ahmed Mohideen, more popularly known as Erose Tailor passed away on July 23 at his residence in Madipakkam. He was 88.

Mohideen was known not only for his talent at stitching Western and Indian clothes but for executing all the needs of the students of Rosary Matric School, San Thome for over 50 years – requirements for day-to-day school, sport and cultural events at this campus.

As his daughter Shahina says, ” He would creatively design costumes of animals and birds which were needed for the school plays on Annual days.”

She adds, “Though he fell seriously ill some years ago, he got back to work once he recovered and only recently decided to retire and arranged to sell all the stock of uniforms he had with him.”

Ahmed started small as a tailor on Arundale Street. In the 1950s.

He then moved to Kutchery Road. Besides school uniform orders from Rosary, he also stitched uniforms for students of other city schools. Erose Tailor, as his unit was named became well-known.

He was also known for his frocks and Western dresses.

He later shifted to a space in the then popular Shanthi Vihar Complex in Luz, off Royapettah High Road.

Recalls daughter Shahina, “Many women film stars were his clients. He took their orders for personal clothes.”

After Shanti Vihar complex had to shut down for re-development, Ahmed chose to operate from a friend’s nook in a neighbouring plaza. In recent time, parents of Rosary wards who wanted only the Erose Tailor uniforms  searched for him and bought from the stocks he had; these parents were former Rosary students and Erose Tailor was their favourite.

Once the stocks were exhausted, Ahmed retired, just months before he passed away.

The family has its residence on Rosary Church Road.

(( )) CALL TO ROSARY ALUMNAE – if you have photos of costumes / sports wear stitched by Erose Tailor’s Ahmed in the 1980s/ 90s, do mail them to – mytimesedit@gmail.com – so we can produce a video on this tailor’s grand work.