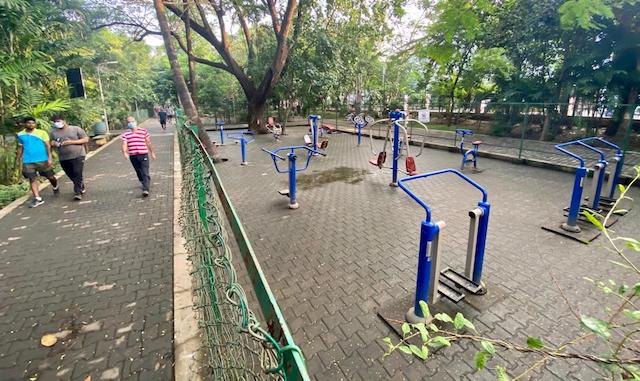 A senior Mylaporean who goes on walks and exercises in Nageswara Rao Park in Luz saved himself from a nasty injury while using the exercise equipment at the run-down open-air gym in the park.

Luz Church Road resident S. Murari, a senior journalist who had a fall and escaped unhurt on Wednesday evening said that the equipment he was using gave way. He says that while some equipment is in bad shape and un-usable, some is not is just okay to use and plastered but there are no warning boards asking people to skip the gym nor is this zone sealed now.

Park users had previously said that the gym, raised by a private company, was sealed last month after equipment was vandalised.

Users say people bring their children into the gym area and many tend to misuse it, so it breaks down. They say there is nobody in the park to secure the gym zone: the private agency does not seem to have cared to care for it.

Sundaram Finance, which has been managing the large park for years says that since the gym was set up by another private agency, it cannot maintain this zone. The gym was an idea initiated by the previous Mylapore MLA, R. Nataraj.

There is no sign of GCC, the civic body either supervising this park.