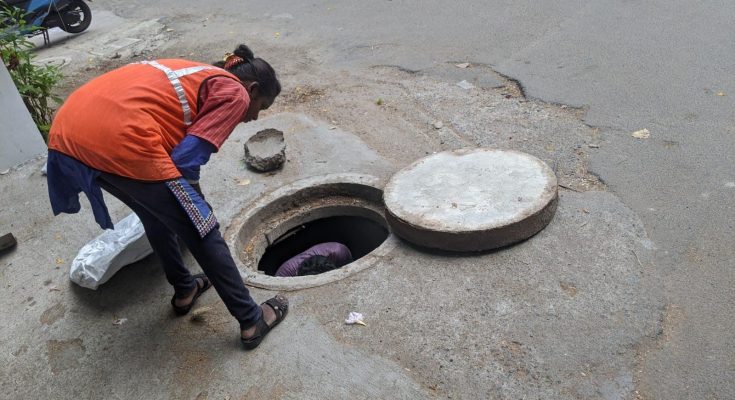 The community of Raja Street, in Mandaveli undertakes this annual civic work to ensure life is well during the monsoon – its leaders keep an eye on storm water drains desilting by the civic body.

This year, when SWD desilting started in Raja Street it was observed that about four SWDs points were clogged with building debris, a couple of drain lids were broken and few others were completely closed with building material piled on top of it by the builder of an apartment being built at that location.

The Residents Welfare Association ( RWA) had informed the builder’s supervisor to clear the drain areas but no action had been taken.  The supervisor even made it very difficult for the GCC staff to carry out the desilting work. 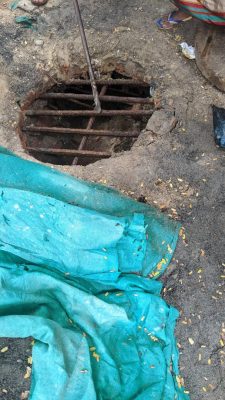 People must remember that works like these are time-bound for a GCC contractor and if some SWDs are inaccessible, the workers just skip those locations. Reason why local residents must step in and co-ordinate and ease out things lest they want the locations to remain clogged leading to flooding, says Ganga Sridhar of the RWA.

The residents of Raja Street stepped in to mediate between the GCC’s desilting team and escalated the issue to the builder’s senior engineer to make the SWD doors accessible, to clear the debris and to replace the broken lids. The team at GCC Ward 171 was responsive, and the local area GCC assistant engineer was on the field to supervise, pushing the builder’s men .

Says Ganga, “We take an audit of the SWDs network by walking along the entire SWD stretch, shooting photos and make sure the sloping is such that water does not stagnate at any SWD location.”

The SWD network of Raja Street extends to Raja Street Extension and TP Scheme Road from where the water empties into the Adyar river. This residential area comes under the  Poonga View RWA; in this area, some 10 SWD outlets  were inaccessible because cars/vans had been parked right above the outlets, for months.

The GCC contractor’s men skipped these areas but Poonga View RWA members got pro-active, managed to locate owners pf the cars and got them to move out the vehicles. The RWA team has complained to local Traffic Police to ensure cars/vans which use roadsides as parking lots be fined and are cleared out.

A week since the desilting work was completed, the bags in which the silt was collected, continued to sit outside every SWD outlet and with every rain, the muck poured out into the drains. The GCC AE was nudged and the bags were cleared.

Says Ganga Sridhar, “Unless residents of a colony physically survey the civic work, nudge the GCC officials and the workers, you will not have clean drains that save the area flooding in the monsoon.”

<<< HAS YOUR COLONY’s TEAM prepared the area to face the monsoon? Tell us your story. Mail 7 lines – mytimesedit@gmail.com. Add photos.