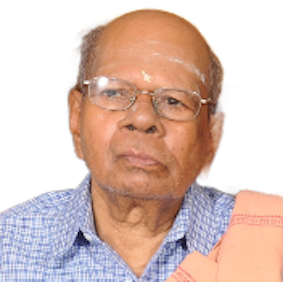 A. R.Balasubramanian passed away in Mumbai on November 9, at the age of 91.  He was a resident of Gokul Flats on R.K. Mutt Road in R.A.Puram for the past 10 years and before that resided in Sri Vinayaka Apartments off Devanathan Road in Mandaveli from 1991.

He was born and brought up in a small village called Alampallam in Palakkad district of Kerala.

After completing his SSLC in Alampallam, he came to Madras around the time of India’s Independence to study typewriting, shorthand and basic accounts. He moved to Bombay after that to join WIMCO Limited in a junior position. Alongside work, he completed his intermediate, B.A., M.A. LLB by attending evening classes.

He served for over 40 years in WIMCO in Bombay, Bareilly (U.P.) and finally in Tiruvottriyur, Chennai where he retired as Regional Controller in 1991.

He was very spiritually inclined, mainly influenced by his wife, Sita who predeceased him in 2013, his family said. They were members and regular participants in activities of the Sri Guruvayurappan Sankirthana Trust (SGST) with regular visits to Guruvayur as well.  He was mainly attracted to the Narayaneeyam and till his last days, he used to recite the complete Narayaneeyam consisting of 100 chapters with a total of 1035 stanzas every day, his family said.