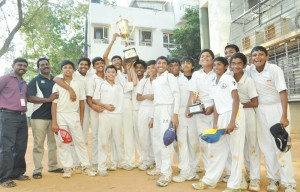 While India negotiated South Africa in the Test-one-day series in safariland, a thrilling tourney unfolded in this neighburhood and has thrown up a new champ.

The Vidya Mandir-Sportstar cricket tourney is an annual feature in the school cricket circuit and this year, the big guns – St. Bede’s and San Thome were missing in the finale.

The Pongal eve finale on Thursday held at the St. Bede’s ground saw Chettinad Vidyashram cruise comfortably to a win.

It beat the spunky P. S. Senior side in this 50 overs a side match.P. S. Senior scored 168 runs for the loss of 9 wickets in its 50 overs with contributions from Ilancheran (55 runs) and Guruprasad (56 runs). The captain was M. Sairam and coaches, K P K Ganesh and Venkat Parthiban.

It was a challenging total and would have set up a fight had the P. S. Senior bowlers pinned down the Chettinad batsmen. But S. Shyam Sunder scored an unbeaten 80 runs in 103 balls and the 47 runs contributed by Samruddh Bhat ( he also took 2 wickets for his side) saw Chettinad post 172 for the loss of 5 wickets, scored in 37.1 overs.

The prize distribution function was held at Vidya Mandir school campus in Luz later in the evening. The chief guest was India cricketer Badrinath.