The south end of San Thome High Road, on the R A Puram side was a buzzing zone since this Sunday morning.

People, mostly Keralites began getting to the Sri Ayyappa Temple in MRC Nagar since this was Vishu day, the Malayalam new year. The stream became bigger through the day.

On the opposite side, cadres of the VCK party and political leaders and their followers headed to the Dr Ambedkar Memorial to pay their respects on this leader’s anniversary.

By afternoon, the Memorial was packed with people and a large posse of policemen and women regulated the crowd here. 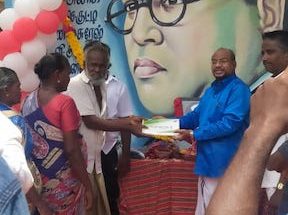