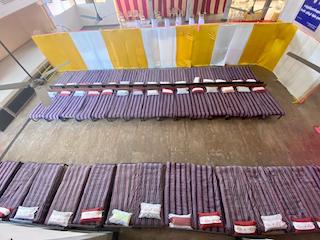 When a Covid Care Centre ( to cc are for people with mild afflictions) turns into a Ayurvedic Covid Care Centre in under 24 hours, you begin to wonder what caused this rather surprising turn. And as you dig deep, a rather unsettling story that unfolded in Alwarpet rolls out.

On May 26 morning, the DMK, led by the Mylapore MLA, Dha. Velu made a big show of the launch of a Covid Care Centre carved out at Ethiraja Kalyana Mantapam on TTK Road.

The guests at  this rather grand event was city MLA Udhayanidhi Stalin, South Chennai Member of Parliament, Thamizhachi Thangapandian and some three scores of DMK local thalaivars and over a dozen TV cameramen.

And the banners at the venue said this was an Ayurvedic Covid Care Centre. Managed by a private group that deals with Ayurvedic treatment.

Less than 3 days earlier, the MLA was taking forward a discussion he was having with allopathy doctors on plans he had for the care centre. So why did this flip happen?

The back story – MLA Velu had been talking to clinics and doctors locally of plans to host locally-run services to the virus affected.

At one such private meeting with doctors who run a clinic, the discussion got going after the MLA said he had tied with the Mantapam on TTK Road as a venue. Velu didn’t have much knowledge of how to fit a Covid Care centre and manage it. But he seemed eager.

Velu sought the doctors’ help for donation of oxygen concentrators. A demo was held, the brand chosen and the supplier transported five pieces. The doctors are told by the supplier that they found a Ayurvedic doctor on the Mataram premises. This puzzles the doctors in talks with the MLA to set up the centre.

Meanwhile, the MLA’s team gets to the doctors again, asking if they can source at least 10 more oxygen concentrators on a request made by MLA, Udhyanidhi Stalin, toileting be given elsewhere.  The doctors say they will try but are puzzled again at the turn of events.

On Sunday, the grand launch of the Ayurvedic Covid Care Centre takes place.  The new collaborator – the Ayurvedic company – even calls up Mylapore Times office wondering why its journalist is not present at the event. The allopathy doctors who hear of the news but have not been invited to the event are further amazed at the turn of events.

When Mylapore Times queries the MLA on this sudden turn of plans, he merely shares a promo and a statement on the launch. No word on the flip.

The allopathy doctors still do not know the fate of the oxygen concentrators they funded and were unloaded at the mantapam. They cost some Rs.2 lakhs plus.

It is not clear if the MLA, in his enthusiasm had even put in place a proper medical, nursing and management team here before the launch of a care centre.

How a plan gets tossed around in less than 24 hours and a ‘Ayurvedic’ centre pops up raises serious questions. Unofficially, we now learn that the change was made at the instance of an influential politician and the MLA was only following orders. And what was the ‘real’ arrangement with the allopathy doctors?

There are some unanswered questions here.

All this happens at a time when the pandemic is raging.