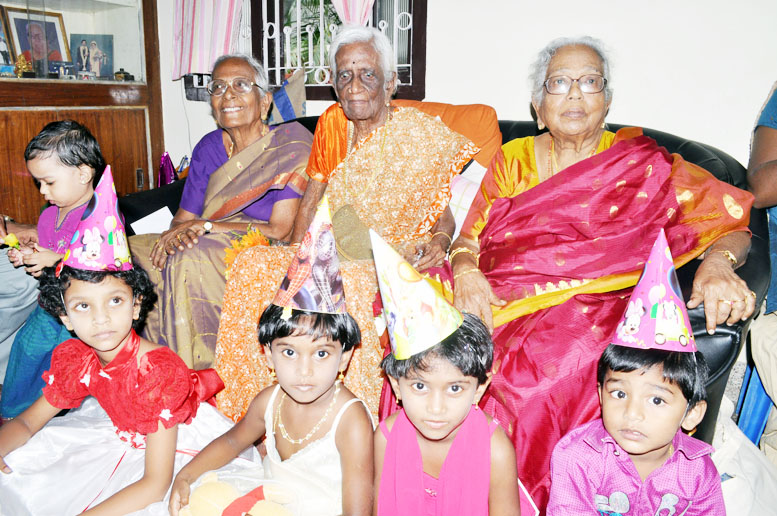 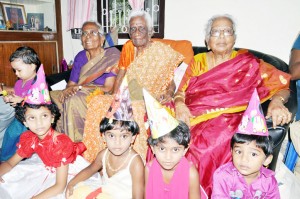 Theresa Thambuswami turned 96 on September 24 and her relatives in San Thome made sure they hosted a big party on the Sunday that followed for this senior San Thomite.

Over 70 family members raised a toast to this resident of Malayappan Street in R.A. Puram – she resides with her sister’s daughter Pamela Mahadevan.

A small get-together was organised for the family on Sept. 26 at one of her relative’s residence in Johenan Street.

Nieces and nephews, grand nephews and grandnieces were present to wish Sundamma, as she is fondly called, on her birthday.

Her two sisters who live in Puducherry were also present and they posed with her when the cake was cut and pieces distributed.

Seen in the picture is Theresa Thambuswami (center) along with her two sisters, grandnieces and grandnephews.

Theresa retired from the Post and Telegraph department after a long innings.

She completed her education at the St. Raphel’s Girls School and did a course in physical training at YMCA.

She began working as the physical director at the YMCA and later joined the army for a year before joining the Post department.

She is one of the three survivors of a family of 16 children.

Relatives said that Sundamma would often recall that her father was the first Indian to work as the Post Master General.

Says Nirmala Gabriel, her brother’s daughter-in-law, “She was a colourful person. She was good at swimming and horse-riding and enjoyed the horse races at the Guindy Race Course.”

A spinster she used to live independently on Custian Beach Road till the age of 92.

“She loved to wear jewellery and dress well and she was the cynosure of all eyes in San Thome, ” adds Nirmala.

Nirmala says that Sundamma says that her secret of a healthy life is to consume milk and egg everyday. Even in this day, she has an egg every day.

Sundamma has never been taken to a hospital this far except for a cataract operation and she does not need spectacles to read newspapers.

This colourful lady deserved a toast – and it did not have to wait till her 100th birthday.