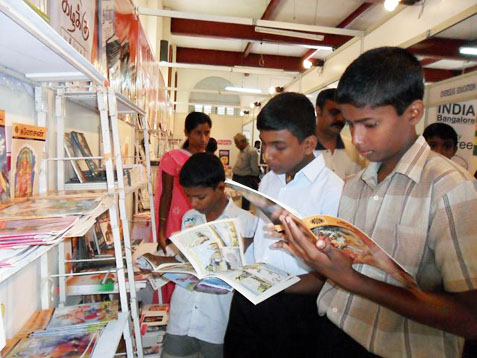 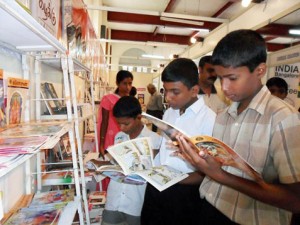 K. Satyanarayan is the director of New Horizon Media, a publishing house. He is a resident of Alwarpet. He writes about his experience at a book exhibition in Jaffna.>>>>>>

I had the opportunity to visit Sri Lanka in September to participate in two book fairs at Colombo and Jaffna.

The Colombo International Book Fair is an annual event conducted at the Bandaranaike Memorial International Conference Hall, which is a huge convention centre like the Chennai Trade Centre.

The fair is a huge event, bigger than even the Chennai Book Fair.On previous trips to Colombo, it was very common for vehicles to be stopped by the police very often for checking. This time the checks were almost non-existent. We were stopped only once late at night, and that was because our cab did not have a light over the number plate! The cop fined the driver 100 Sri Lankan Rupees, which the cab driver paid up and got a receipt.

This year’s Jaffna Education Fair was being held for only the second time in Jaffna. It was held for the first time in June 2009, just after the war had ended and the organisers told us that there was a tremendous response from the people of Jaffna at that time.

The organisers have now decided to make it an annual feature. This year’s fair focused largely on higher education opportunities for school children in Sri Lanka and overseas. We saw that as an excellent opportunity to interact with school and college students and were overwhelmed by the interest in Tamil books, especially books for children.

While I had travelled to Colombo a few times in the past, this was the first time I was visiting Jaffna. Although road transport between Colombo and Jaffna has been opened up, we had to obtain permission from the authorities in Colombo to travel to Jaffna and we were permitted to go but were required to take a flight.

Flights to Jaffna are currently operated only by the Sri Lankan Air Force and we went there on a 20 seater propeller aircraft, from the Rathmalana airfield outside Colombo.

The atmosphere in Jaffna is one of cautious optimism. Both agriculture and business, the mainstays of Jaffna, are slowly beginning to pick up. While the older generation’s hopes for the future borders on pessimism, the younger generation is optimistic, but waiting and watching to see how the things shape up. Jaffna has seen intermittent periods of peace in the past, during which people hoped that peace was here to stay and began to settle down, pick up the threads and start up businesses or other activities, only to be forced to pack up and move again when the war resumed. The confidence that peace is here to stay seems to be taking root, albeit slowly.

Many locals I spoke to felt that Jaffna was poised for development and this was the right time to lay the foundation for many kinds of activities. Colleges and training outfits are starting up. The tourism business is picking up. There were busloads of tourists visiting Jaffna, many of them Sri Lankan tourists. When I was at the imposing Jaffna Public Library, I saw a large crowd of tourists streaming in to the library, which seems to be a tourist attraction in addition to being a haven for readers. Public transport between Colombo and Jaffna has been open for quite some time and there are many overnight bus services connecting the two places daily.

On the flight to Jaffna, we were accompanied by an Indian businessman from Bodinayakanur who had made a business out of selling sarees in Jaffna. He told us that he made frequent business trips to Jaffna every other month spending almost a month there each time!