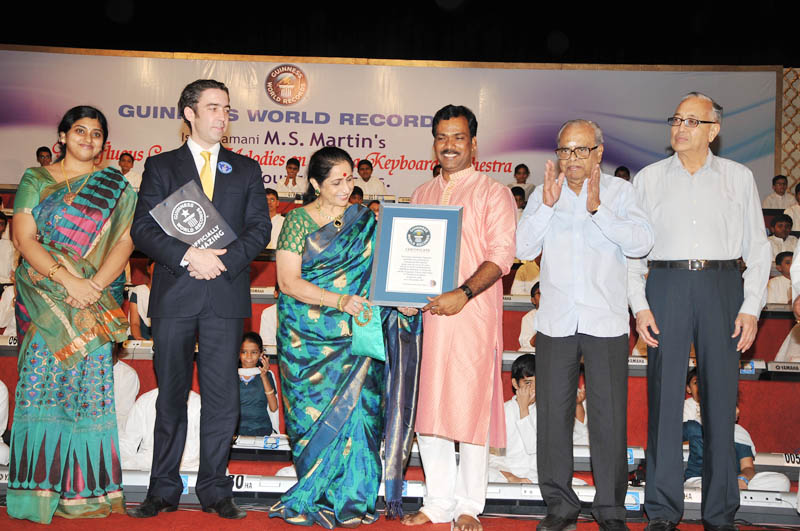 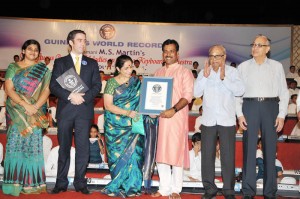 109 students of ‘Mellifluous Melodies on Keyboard’ created a new Guinness World Record by creating a carnatic symphony on keyboard.

The school is run by M. S. Martin, a resident of R. A. Puram for the last 6 years. Martin is a gold medallist in B.A. Music and was bestowed the award of Isaimamani in the year 1993 by Annamalai University. He has been training children in carnatic music for the last 14 years.

The group created a carnatic symphony on the keyboard for 15 minutes at the Music Academy on Nov. 27, to break the existing Guinness record for largest keyboard ensemble.

The adjudicator, from the Guinness World Records, Jack BrockBank handed over the certificate to Martin in the presence of Music Maestro M. S. Vishwanathan, Carnatic Vocalist Aruna Sairam and N. Murali, President of The Music Academy. 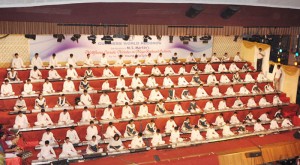 The earlier record was created on Sept.25, 2004 by Billy Joel with 107 participants, who played “Piano Man” for five minutes at the opening of The Shoppes at Cross Keys, Florissant, Missouri, USA.

Martin has entered the Limca Record book in 2009 with 75 children from his school with a similar symphony.

I have been teaching carnatic music on keyboard for the last 14 years. My next step is to improve on the quality of the music, says Martin.

Most of the children who preformed during the event are from this neighbouhood, he added.