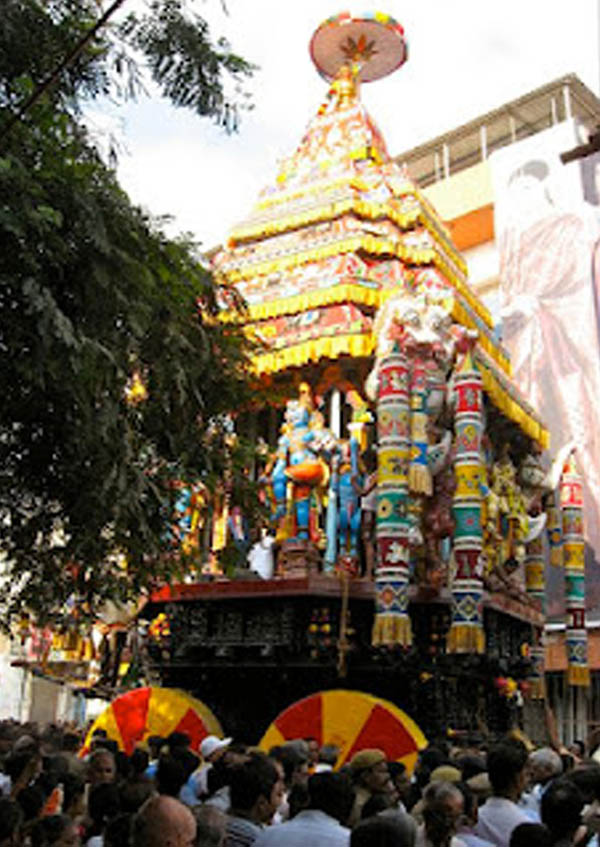 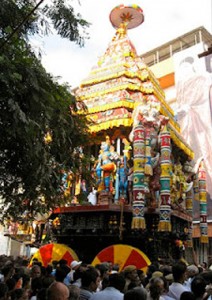 Today was the day of the ther procession at Sri Kapali Temple, Mylapore.At the wave of a green flag, the procession  began as planned – at 7.30 am.

However, in less than 20 minutes it had reached the end of East Mada Street, at the far end.

Why did the ther have to run and leave many devotees a tad disappointed that they missed the ther at their regular spot? After all, many Mylaporeans time their visits to the Panguni vizha celebrations, having done it for ages.

Some said that the rope was new and it made pulling the ther easy! Some others said some volunteers were more eager to draw the ther down the veedhis than stop at many standard points for devotees.

A temple staff said that they did not have control on the volunteers – hence the ther was on R K Mutt Road close to 9 am when in the past it reaches this point at about 11 am.

The mada veedhis were dirty and some points stank. This was just not a conducive setting for a great temple fest. Much kater, as the ther began to roll, workers of a private waste clearing agency contracted by the Chennai Corporation, the city’s civic body got to work.

That was a tad late.

Once the ther rolled off East Mada Street, the whole zone was bereft of festivity. No earthy decor. No music. The hawkers were keen to spread their wares and now, the narikuravas had also dominated all the space with their beads, chains and wrist bands.

The feel of a festival was certainly missing here.