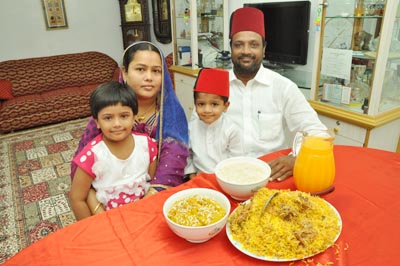 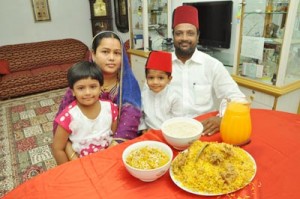 This year Muslims celebrated Eid-ul-fitr. on August 20. Apart from the regular religious practises that are followed the food that is prepared on this day is always special.

We spoke to a few Muslim residents of the neighbourhood and found out what filled their menu for the day.

At the residence of Abdul Rahman in Nimmo Street milk vermicelli was the main dish.

“We had ordered briyani outside but the payasam was made at home,” says Zareen Rahman his wife.

This is an important and favourite dish that is made at all Urdu speaking families, she says. “Apart from this I also made rava kesari,” she added.

This family says its generations have been residing here for over 200 years and were one of the first Muslim families to have settled in this neighbourhood. 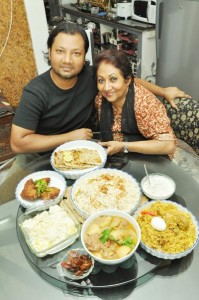 Mumtaz Alam a resident of San Thome High Road prepared a variety of delicacies for Eid (photo on left). “This year my son had come down and it was a special day,” she says.

On her menu were chicken briyani, boneless mutton kuruma, chicken fry, vatalapoum and murtaba ( a form of parotta).

The most important dish that is prepared is the vatalapoum. This is a dessert that is made with egg, cashew nut, cream, condensed milk and sugar. This is the most popular dish among the Tamil speaking Muslims down south, she says. “But nowadays not many people make it, as it requires lots of time.”.

Another must do is murtaba or stuffed keema parotta. The parotta is made using flour, milk and curd.

Says Mumtaz who also holds cookery lessons, “Nowadays many people just order briyani from outside, but the traditional way of making it involves using pure ghee and gingely oil. When it is prepared that way the food does not become heavy,” she says.

Mutton kuruma is another speciality that is eaten with ghee rice.

The kuruma does not have any masala and the meat is marinated with ginger, garlic, and onions, she says.

Khamar Jahan, daughter-in-law of Justice Basheer Ahmed and a resident of Alwarpet says that they made a large quantity of milk kheer.

“On this day we normally get lot of visitors and we serve this to all.

Though this time we went to my brother’s house for lunch we made kesari halwa. This halwa is made with rawa and has lots of nuts and dry fruits in it.”

Clearly, food and festivals go together.