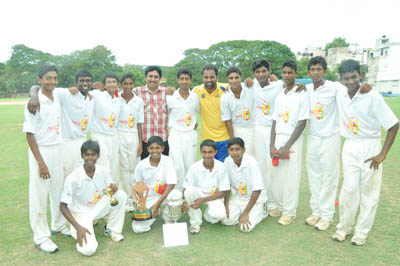 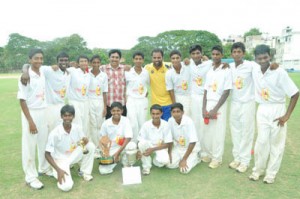 It beat Don Bosco, Egmore by vurtue of its 1st innings lead at the Vivekananda College ground, Mylapore.

Don Bosco batsmen had to overhaul the San Thome 1st innings score of 220 in 87.4 overs.

It could manage only 165 for the loss of all its wickets.

San Thome batted again on Day 2 and scored 138 for 5 wickets and by 3 p.m. the match was called off since the team had won on a first innings lead. Karthik hit 50 runs in the 2nd innings.

Don Bosco won the toss on Day 1 morning and opted to field. 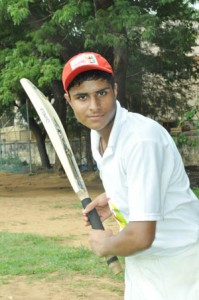 Aditya Barooah (photo) scored 109 runs including 8 fours and 1 six in 260 balls and was unbeaten till the end. He is a resident of Bishop Gardens, R. A. Puram.Don Bosco’s B. Surya took 6 wickets in the 30 overs he bowled. This was a 90 overs per innings match.The C. Ramaswamy rolling trophy was presented by A. Vishwanathan, TNCA’s Chairman for School and College Committee to the winners.  A winner’s cup was presented Bro. Antonysamy, Principal of San Thome to his school team.