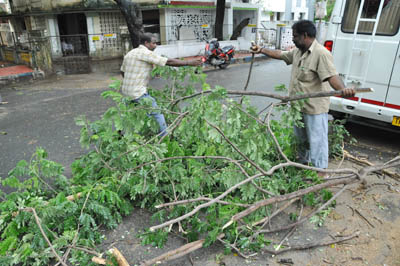 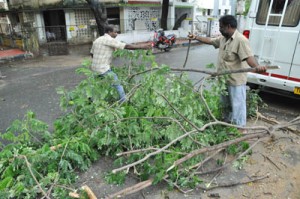 As news came in this evening that Cyclone NIlam’s landfall would hit the Mammallapuram shores, people got back home quickly.

Darkness fell as early as 5 p.m. and most roads in Alwarpet, Mylapore and San Thome were deserted.

Here is a video taken on the sea shore at noontime today. http://www.youtube.com/watch?v=hfApKRmHnB8

Though the Deepavali festival is less than a fortnight away, the weather kept people indoors and many shopping zones like Alwarpet and Luz were deserted in this area. A few let the decorative lights glow.

At 6 pm, even the streetlights had not been switched on so the darkness was intense. However, power was on and so were internet lines. There was no rain through the evening but winds were gusty.

Below is a early afternoon report filed here –

As people began to face the effects of Cyclone Nilam, the Mylapore neighbourhood was deserted in many areas at about 3.30 p.m. Wednesday.

The winds have been gusty all afternoon and uprooted small avenue trees in palces like R A Puram and Abhiramapuram.

Residents of San Thome who live close to the sea shore said that gusty winds kept sweeping through.

A carpet of leaves and branches, ripped by the winds covered all roads and streets. But there was little or no rain.

People who drove across the Adyar river felt  the string winds blowing from the sea side, from the Adyar Creek and the river had breached its banks.

Thankfully, the wind dried up most wet streets and water logging was minimal. 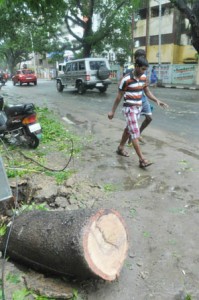 Power went off and on and at times, internet lines malfunctioned.

The adventurous were seen on the seaside in Foreshore Estate, where the waves moved inwards and went up higher than usual.

Below, a report that was filed this morning.

There has been continuos rains from the previous night, smaller trees were uprooted at CIT Colony  and San Thome. Water stagnation was also a seen in some parts..

P. Vimala of Leith Castle Road says that the place is calm. This was at 10 a.m. Her residence is near the sea. She said there are no rough winds.

Some of the name boards of shops on the main road have crashed, she says.

Leith Castle Roads is free of rainwater and the place is quite, says Vincent, a senior resident of this place.

Mary Madeline, a resident of Karaneeswarar Koil Street says, “Since I live on the fourth floor I am not able to come out of the house because of the winds.
The roads are deserted here and only a few people are seen walking around.” 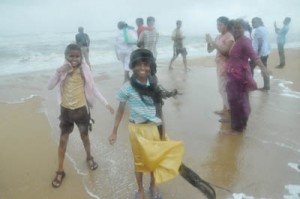 “I was not able to drive my two vehicle to work,” says Soundari Ramesh a resident of Nattu Subbarayan Street. “Because of the constant wind, tree branches kept falling on the roads. Someone may easily get hurt.”

The roads are very slushy, she adds.

I came  outside my apartment at about 2 p.m. and the view was lovely,” said Ramkumar a resident of Alwarpet. “The weather is lovely and windy. I stay on the 7th floor and it looked as if I could touch the clouds,”  he added.

<< WE WANT YOUR PHOTOS OF THE WEATHER IN YOUR AREA. Mail them or send us the web link of YouTube link of your video. We will feature them here >>

One Comment on “Keeping tab on Cyclone Nilam; through Wednesday”