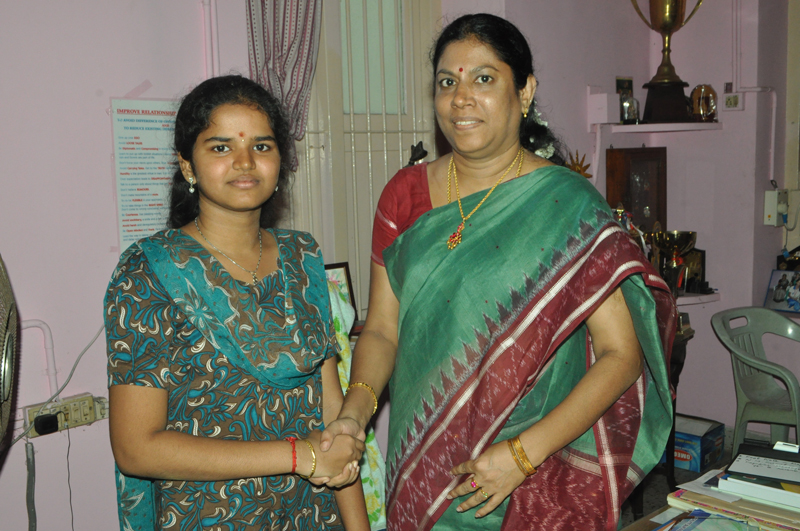 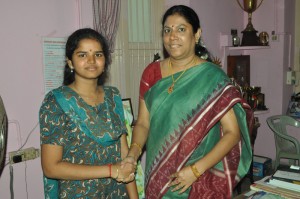 The school topper here is S. Vijayalakshmi ; she scored 1128 / 1200, Her father, S. Srinivasan is a auto driver and they live at Thiruvalluvar Salai, Teynampet. Family’s contact no : 9840419927. ( She is seen in the topmost photo being congratuated by her Head Mistress)

The school has achieved cent percent result this year.

The school topper is J. Mangala Preetha of commerce group with the total of 1184 / 1200.  She is from .Vanniampathy Street, Mandaveli. Family’s contact no: 9941468372. The second rank is bagged by R. Swathi with 1178. The third position goes to Sanja Aravindan of computer science group scoring 1175.

There are many centums in various subjects R. Mithunjay has scored centum in Economics, Accountancy and Business Maths.

Three students got centums / ranks in subjects.  S. Srinidhi scored 198 marks in Sanskrit and got the first rank.

R Divya was the topper here with 938 marks. She is from the Commerce stream. She scored centums in two practical exams.

M Maruthi was the topper here with 1154 marks. He got 200 marks in accountancy and 196 marks in commerce.

The school, in R A Puram had a 64% pass percentage.

U Bhavani from New Street, Mylapore scored 1176 marks and stood first. She hails from a poor family.

All the girls here who appeared for the Plus Two exam passed.

The school had a 97% pass record this time.

R Janani stood first here with 1129 marks and she resides at KVB Garden, R A Puram. The school is on 5th Trust Cross, Mandavelipakkam.

S Hemalatha stood first here with 1150 marks in the commerce stream. She got centums in commerce, economics and accountancy. The school had a 98% pass result.

At this school of Chennai Corporation on Bheemana Garden Street, the topper was Velayuthan M. He scored a centum in accountancy and scored 1120 marks.

The topper here was S Padmavathy who scored 1116 marks. The pass percentage was 99%. M. Manjula got a centum in economics.

V Amudhanila was the school topper with 1148 marks. She scored centums in commerce, accountancy and economics.

3 Comments on “Plus Two exam school toppers in Mylapore”