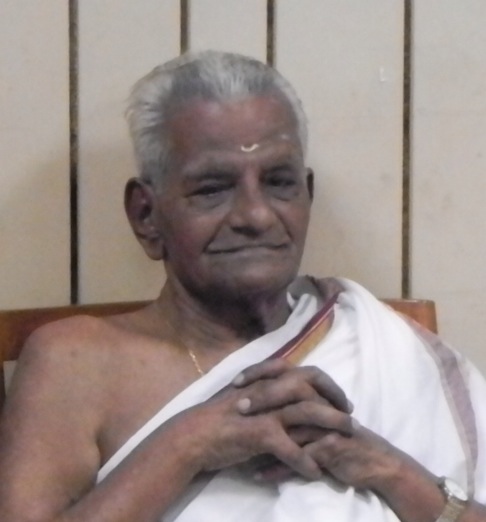 A resident of Mylapore over 6 decades, Thirukalikundram Ramachandra Ganesha Dikshithar (aged 86 years) passed away on July 7, 2014. Born in Thirukalikundram, he was the eldest of 3 sons and 2 daughters of Shastra Ratnakara Ramachandra Dikshithar, the principal of Madras Sanskrit College and director of Sanskrit studies at the Benaras Hindu University. He studied at P. S. High School, Presidency College and Benaras Hindu University. A civil engineer by profession, he commanded high respect in the field.

He holds a record for constructing the maximum number of hydro electric dams and power houses. Prominent ones are Tunga Bhadra Dam, Krishna Barrage, Mettur Dam, Kundah Dam, Pegumbahalla Dam and Muchkund Dam. Thus, he was instrumental in providing water and electricity to lakhs of people. He has worked in many large organisations, both in India and abroad. He was well versed in Sanskrit, English and Tamil and held a high respect and love for the Sanskrit language and often quoted verses/vedas and explained the meanings in detail. He had a great sense of humour, was a very good conversationalist and endeared himself to persons of all ages. In spite of many trying circumstances, he provided the best education for all his children. All of them are well settled in life, thanks to the untiring efforts of him and his spouse, Saroja Ganesan.

In spite of his failing health, he went on wheelchair to cast his vote in the recent general elections and inspired many youngsters in the locality to vote and know the importance of casting their vote. He took a keen interest in the activities of P. S. High School and Sanskrit College throughout his life. Sharpness of intellect and wit, discipline, punctuality, personal cleanliness, great pride in our heritage and  culture were some of the hallmarks of his character. He helped in identifying wells with good water reserves.