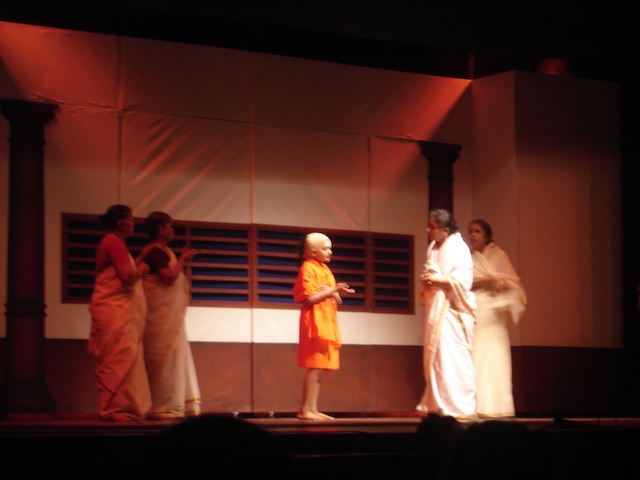 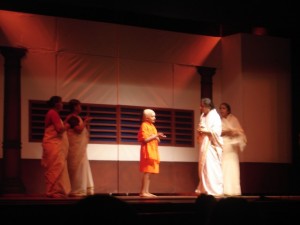 A packed Narada Gana Sabha watched a new play by dramatist Bombay Gnanam on Friday at Narada Gana Sabha auditorium – it is called Bhaja Govindam and it focuses on the life of Adi Shankara. Episodic, the play threads Shankara’s key phases in his life with cuts to Periyaval of the Kanchi Mutt and a present day couple’s relationship with the acharyas and their philosophy.

Members of the Mahalakshmi Drama Group, all 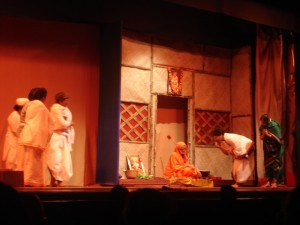 women play different roles with ease and grace. This is Gnanam’s biggest production, taking off from the successful ‘ Bodhendral’ play which also drew a huge audience and has run for over 50 shows.

Well lit, appropriate sets and recorded music and dialogues make this is a watchable play and seems to draw in the audience who already have an experience with the subject.

Gnanam said at the curtain call that it took a year to put the play together and that though city sabhas have funded the first few runs of the shows, people who watch it must do two things – spread the word even using Twitter, FaceBook and WhatsApp and donate their mite.

At the gates of the auditorium members of the drama troupe held out boxes for people to drop their mite though not all loosened their purses.

Gnanam has urged people to attend on Saturday in large numbers. “I was told of the eclipse…you may come in by 3 pm, watch the play and then go home and have a nice dinner..don’t stay put at home,”, she said.

< If you watch the play, share your review of it here in the comments box