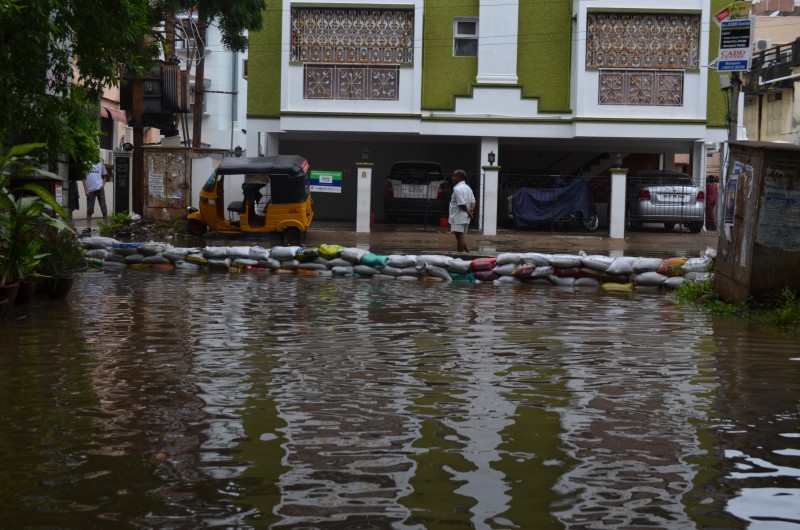 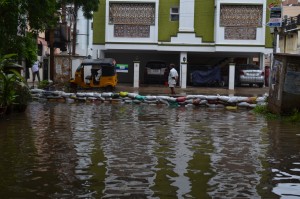 Residents in the Mylapore area came up with novel ideas to prevent flooding in their neighbourhood. Avinash Raghunathan sent us a report on how an Abhiramapuram community got together to stop water from flooding their area.
He says, “When it rained last week, most of the water from Dr. Ranga Road, Mylapore seeped into Abhiramapuram 1st street as it is a low lying area. As there was no outlet for water there, the water level slowly started raising. As the water started entering the homes of the residents, they immediately pulled in their resources and built a makeshift dam to prevent the water from entering their street”.
Later, residents from both the streets provided food to flood victims.

On Dec 5, at Anand Flats on Dr. Ranga Road, Mylapore, the residents, including children and women, joined hands to remove the water logged at their premises.
With buckets and brooms in hand, they braved the fatigue of three sleepless nights (they didn’t have power for three days) and worked tirelessly in clearing the mess at their complex. The picture on the far left was taken on Thursday, Dec 3 and the picture on the left was taken on Saturday, Dec 5 after the clean up operation.
– Reported by T. S. Gopal, a resident of Anand Flats