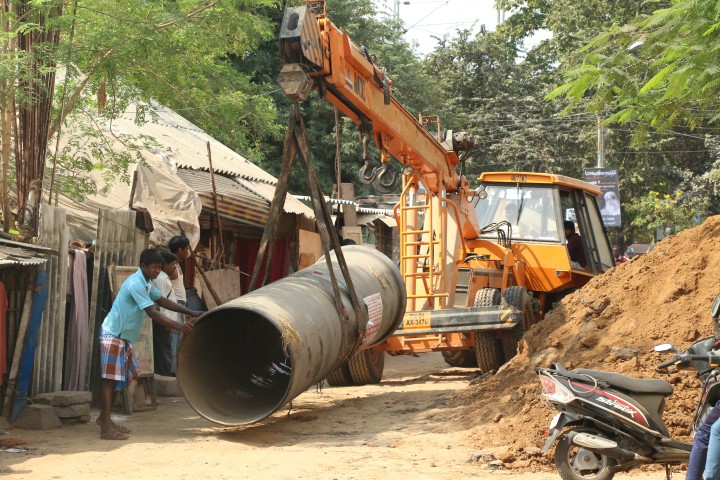 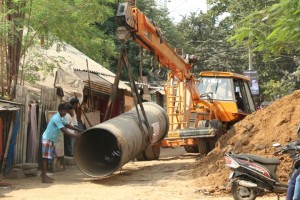 The members of Raja Annamalaipuram Residents Association ( RAPRA) have been flooded with phone calls, mails and messages from residents of the area on the absence of supply of metro water for nearly 15 days now.  They were very surprised that even during severe drought they had an alternate day supply of water and never had their pipes gone totally dry like now;  more so after unprecedented heavy rains recently.

Petitions were given by residents to the Area Office of Metro water and officials could not diagnose the problem and give a solution. With no solution in sight the ladies of the area decided to assemble on Feb 27 and conduct a protest to tackle this problem.

Ponambalavan, (Superintending Engineer Central & Co-ord) Chellapan, Babu and Ravichandran of Metro water were invited to the meeting of the residents of the area. Ponambalavan first explained that this area gets its supply from MRC Nagar and Valluvar Kottam pumping stations. Later he said that despite increasing pressure at MRC Nagar, the water, due to a block at V.K. Road, is not reaching R.A. Puram. The supply point at Valluvar Kottam too is not fully functional due to blocked pipes.

He assured the residents that they had started digging pits on 4th Main Road to locate the blocks and clear them.  Similar exercises would be done on all other roads and he hoped to resolve the problem in a couple of days.  He also promised that pipes would be changed if necessary (as seen in the picture).

Clarifications were sought by the women of the area and the difficulties faced in buying water were explained. Based on the assurance given by the authorities, the residents then decided to postpone their protest and submitted petitions to the concerned authorities.