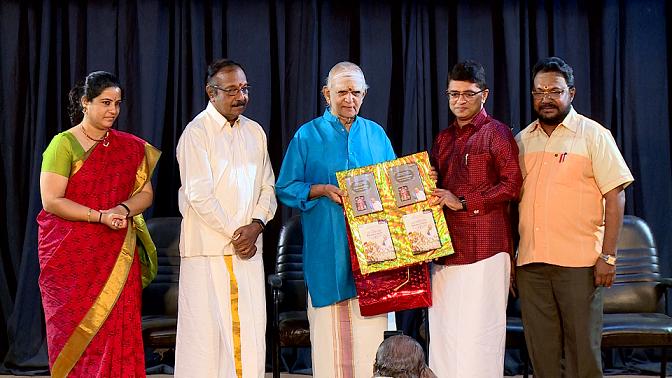 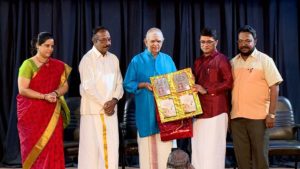 Dancer Padma Subrahmanyam, Lalgudi GJR Krishnan and drama artistes Crazy Mohan and Maadhu Balaji were just a few among the many noted guests who had gathered on Aug 20 at P. S. School to celebrate the 98th jayanthi of harikatha exponent T. S. Balakrishna Sastrigal.

Every year, since his demise in 2003, the family gets together to celebrate his life and his work. This year, the guest of honour was mridangam guru Dr. Umayalpuram K. Sivaraman.

Concerts and dances were held. But what moved the audience to tears was the screening of TSB Sastrigal’s narration of the kritis ‘Janaki Ramana’ and ‘Nithi Salaa Sugamaa’. Some say they felt his presence on stage, it seemed like he was alive.

An ebook format of the work of TSB Sastrigal ‘Thyagopanishad’ and Narayaneeyam and mahabharatam CD’s of Srivatsa. S. Jayarama Sharma were released by Swathi Sanskriti Series. Trichur Ramachandram received the first copy of the e-book and senior advocate, Sathish Parasaran, received the first copies of the CDs from Dr. Umayalpuram. K. Sivaraman.

The event ended with a vote of thanks by his sons, directors Mouli and S. B. Khanthan.