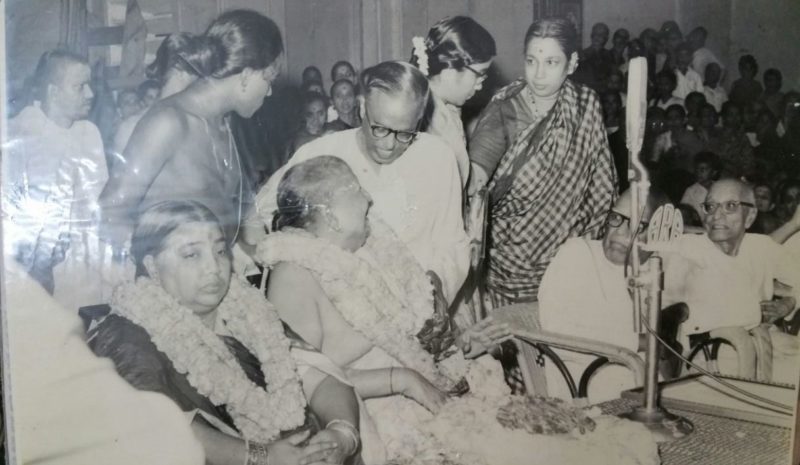 The brand new Rasika Ranjani Sabha in Mylapore which opened its doors a fortnight ago, has stirred the memories of a legion of Mylaporeans. Mylaporeans whose cultural and social life was closely entwined with the programmes at this cultural space on Sundareswarar Street.

For Renuka Krishnamurti, it was time to rewind. She is  the daughter of V. S. Krishnamurthi, the man who had re-modeled the R. R. Sabha way back in 1958.

Renuka and her mother, K. Saraswathi, the wife of V. S. Krishnamurthi, had loads of anecdotes to share on this occasion.

83 year old K. Saraswathi has been a resident of Mylapore all her life. She says, “R. R. Sabha was first constructed in 1928. When we first moved to New Street in November 1935, I was only two years old. R. R. Sabha was the only sabha in the Mylapore area then. Kutcheris were held twice a month, and sometimes dramas too. When I was 10 years old, I started learning music there. My teachers were B. Rajam Iyer and K. Natesa Iyer. I remember the fees was two rupees per month for the beginners class and five rupees for the varnam class”.

She goes on. Gently.

“We did not have music books at that time. All of us would copy the songs from our teachers’ notes in class, and that was the case till music books were written by the then principal of the sabha, A. S. Panchapakesa Iyer,” she says.

The renovation of R. R. Sabha was undertaken by Saraswathi’s husband in 1957. He was a building contractor and was friends with Natesan, Srinivasan and Kuppuswami, the three people who ran the sabha at that time.

It took about a year to complete the work and M. S. Subbulakshmi’s kutcheri was the highlight of the inaugural function in 1958 when it reopened.

Saraswathi says, “The old sabha building, before it was demolished and reconstructed, had one big hall and a stage at one end of it. Two rooms were there for the drama artistes to use. Music classes were held at the hall. My husband, who was a civil engineer, stuck to the original design and built an office room there too. The ceiling was built by another person.”

Recalls Saraswathi, “My husband has constructed several buildings in the city which are landmarks including the Ananda Vikatan building at Mount Road, singer Radha Jayalakshmi’s house at Tilak Road,  and the Thyagraja Vidwath Samajan building at Thyagarajapuram, Mylapore”.

Renuka adds, “When I was young, I would accompany my parents to several dramas at the sabha. The last time I watched a play at the sabha was in 1981, the dance drama ‘Maduranayaki’ performed by late chief minister of Tamil Nadu, J. Jayalalithaa”.

She adds, “A slab with my father’s name engraved on it was put up on the wall outside the office of the   R. R. Sabha after my father completed the construction. It is only when the old building was demolished did I realise that I don’t have a picture of that.”

She is hoping that any Mylaporean who files away old pictures may be able to locate one of the sabha office building and share a copy.We also get the feeling that Saraswathi’s family would feel proud if the current managers of the sabha erect plaques which remember all those who made this sabha great.

WHEN DRAMAS WERE HUGE HITS

Saraswathi vividly remembers the dramas she went to in the 50s. “We were members of the sabha at that time and I remembering paying not more than Rs. 20 as the yearly membership fee. And it was very difficult to become a member at that time. Non-members paid not more than Rs. 5 for their tickets”.

Raja Raja Chozhan by TKS Brothers was a play she can never forget.  Then there wasAvvaiyar.

She recalls, ” I remember reading about a play called ‘Avvaiyar’ in Kalki magazine. The review stated that T. K. Shanmughan almost broke his back playing the character. I was so fascinated by the review that I decided to go and watch the play”.

She says the most popular plays were those by R. S. Mahohar and Cho Ramaswamy.