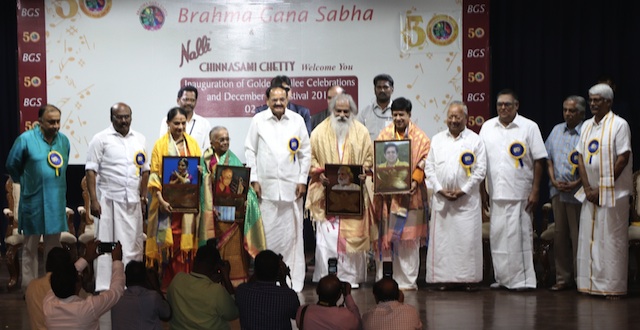 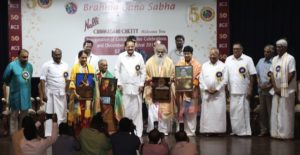 Four senior artistes were decorated with awards at the launch of the December Season festival of Brahma Gana Sabha on Sunday evening. The vice-president of India, Venkaiah Naidu was the chief guest and he presented the awards.

Venkaiah noted that Chennai was abuzz with concerts in December and that he was happy to recognise great artistes with awards. “Music is soothing. Every morning, even when I am travelling I put on the songs of Annamayya and listen to them,” he said, often digressing from the wirtten speech to share his thoughts on early days listening to concerts in native Nellore, on the importance of India’s arts, on the importance Indian culture was given abroad and the need to preserve the arts.

Then followed the first concert of this fest – by veena artiste Jayanthi Kumaresh.

The golden jubilee celebrations of this sabha also start with this festival. Present at the launch were sabha president Nalli Kuppuswami Chetti and the sabha team and also TN state minister D. Jayakumar.

The annual December Season Guide published by Nalli’s was also released on this occasion.