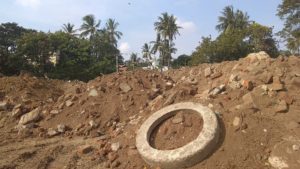 This is the state of Chennai Corporation play ground near E-Seva center at Kamarajar Salai in R.A.Puram.

Huge piles of mud, and construction debris have been dumped here. Earlier, this ground  used to be a garbage dump yard.

Since the past few months, the civic body has been desilting the storm water drains (SWDs) around the neighbourhood. At some places they have also constructed new SWDs like on R. K. Nagar First Cross Street.

However, the silt and debris removed from some of the drains have been dumped on this ground using lorries. They have been here for close to a month now.

In addition, some workers have also put up tents for themselves and are using this ground for their day to day activities.

Said a worker who was at the site, “The silt that was removed from the storm water drains have been temporarily kept here. They would be shifted to perungudi dumpyard soon.”