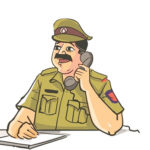 Sujatha Vishwanathan of Abiramapuram is saying ‘thank you’ to Chennai City Police for what people would consider to be a job – they restored her purse she lost in a store some days ago.

A resident of Abiramapuram 3rd Strert, Sujatha, who teaches at Chettinad Vidyasharam was shopping at a Spencers store when she realised her purse was not with her at the billing counter.

On a request to the store manager to show her recent CCTV footage, it got enabled and from the footage it was clear that her purse had fallen from her armpit and was picked up by an old man who had quckly put the purse in his bag.

Sujatha says they could not identify the man’s face as he had his mask on. The purse had some Rs.2000 in cash and original driving license, a RC book and  bank cards.

She recalls now, “I was afraid about the swipe option that was enabled in cards which can make one purchase without pin, by just tapping on the POS machine. I blocked all my bank cards following this incident.”

Sujatha recorded this part of the CCTV footage and went to E4, Police station, Abiramapuram. The police there took an oral complaint and promised to investigate the case.

This morning (14th June) Sujatha received a call from police officials – they had located her purse. Police officials then came to her residence, handed over the purse and took a written complaint from her for the record.

Nothing is known of the ‘old man’ who had picked up the purse.

Says the Abiramapuram resident, ” I salute the police officials of their commitment to duty even at this difficult times when the virus is with us. This work will create a positive impact on the police and on our neighbourhood.”