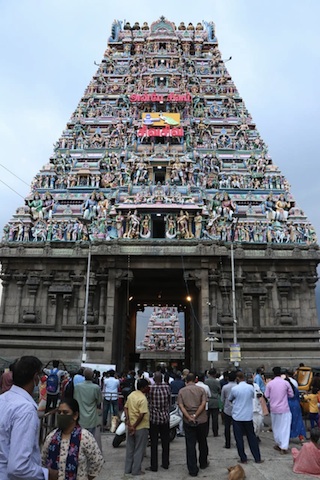 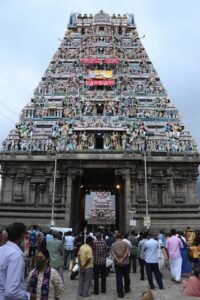 On prodosham evening, on Tuesday evening, Sri Kapali Temple presented a magical visual. For, the dark, rain bearing clouds rolled in the skies above and it began to rain and then, in the early darkness the campus lighting of the temple and its gopurams were switched on.

Prodoshams are regulated for people who wish to be at the temple on these evenings, to respect the pandemic regulations.

So while the rituals went on for about 90 minutes in the mantapam and then the procession  inside the temple premises, people were asked to wait outside the temple. They were let in after the rituals got over and though sanitisation was absent all visitors had to enter only with their masks on.

On Tuesday, there were some 100 people present at 6 p.m. They followed the queue inside but few chose to keep some distance even in the queue. However, people are asked not to be around for too long and discouraged from sitting or spending time in other parts of the temple.

Prodosham is web cast via the temple Youtube channel.