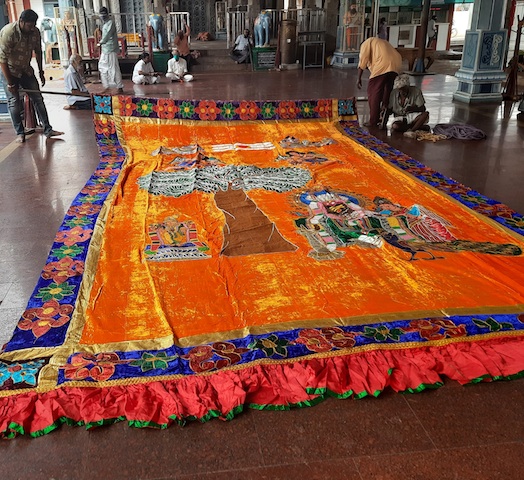 This Friday morning will see the commencement of the full fledged Panguni Brahmotsavam at Sri Kapaleeswarar Temple after two years, with the Kodiyetram just after 6.30am.

Just ahead of the utsavam last year, the national lockdown came into force and the festival had to be postponed. Last year’s utsavam was held earlier this month but with all processions inside the temple and only a couple of vahana processions.

In light of this background, devotees, especially those long time traditional residents, have all been looking forward to the ‘Adikara Nandi’ and the late night ‘Rishabha Vahanam’ (this year it will start on Tuesday night at 12.45am) processions.

However, news has not been rosy in the last few days. The number of Corona cases in the so called second wave has been on the rise.

A meeting was held recently among the senior priests, the temple authorities, the police and government officials at the temple to discuss the management of the Utsavam.

In that meeting, there were suggestions made for compulsory temperature checking at the entrance and masks being made mandatory for entry inside the temple but the authorities saw this to be a humungous exercise especially in light of the huge crowd expected at the festival and it is unlikely this will be implemented. 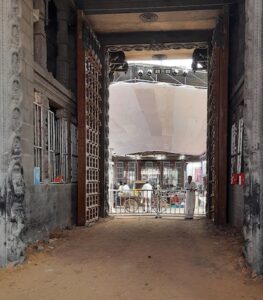 ‘Appa’ has to come out on vahanas

A devotee who has been visiting the festival for over three decades without a break says not just her but the entire community of Kapali devotees are looking forward to the festival.

This is one festival that they do not want to miss ‘The Chariot and Arubathumoovar attract a huge crowd from across the city. But they want food distribution to be regulated or restricted.

Gopura vaasal darshan and deepaaradhanai is another zone where one finds a big crowd. It would be good to restrict devotees there. They can block the passage from all sides during that period.

As seen in the recent Brahmotsavam at Thiruvallikeni, the ‘Thattu stops’ too can be restricted to major junctions at the street corners.

“We can have all of these restrictions but if our ‘Appa’ does not come out on the vahanas, the devotees will be really upset as everyone is looking forward to the full fledged Brahmotsavam,”said a devotee.

Restrict entry to the Utsavam

A senior priest at the temple supports some restrictions on the crowd. “Given the current pandemic scenario, they can restrict this utsavam to devotees in and around the Mylapore. They can make aadhar card mandatory for entry on the big utsavam days during the time of the procession on those days.”

Mylapore resident and temple activist T. R. Ramesh, who has filed legal cases on issues relating to the Kapaleeswarar temple in recent times, is of the view that the Utsavam should be postponed by a few months given the current trend of rising cases “While sentiments and faith are important, they take a backseat when it comes to public health.”

R. Shiv Kumar, founder of an IT firm who recites the Pathikams every morning at the temple is of the view that the conduct of the chariot festival and Arubathumoovar will shoot up the cases “If they allow ‘Ther’ and Arubathamoovar, the crowds here will contribute to Covid cases going upto 1000 per day in Chennai area.”

T. N. Venkatanarayanan has watched the Panguni Brahmotsavam for over five decades.With his house at the western corner of Nadu Street, he hosted hundreds of devotees every year. He says the Brahmotsavam brings about a lot of positivity and vibrancy to devotees  “I plan to attend with care, to ensure I do not get swamped by the crowd.”

Santhosh Santhanam has performed Sripatham service for over a decade. He is of the view that  Kapaleeswarar’s Panguni Brahmotsavam is for lokha kshemam “You can restrict the number of people, the number of hours of the street processions but the utsavam has to happen without fail for it is for the welfare of the world at large.”

Finishing touches inside the temple

Inside the temple, the preparatory work was on, in full swing on Wednesday. The finishing touches were being given to the huge, colourful silky screen that will be put up in front of the Thiru Kalyana Mandapam. The big kudais, that had a few tears, were being stitched up by service personnel.

The overhead roof sheet has been put up around the prakara and till the chariot on the Eastern side. Under the Raja Gopuram, the floor has been raised, rolled and flattened for the big Vahanas to have a smooth passage.