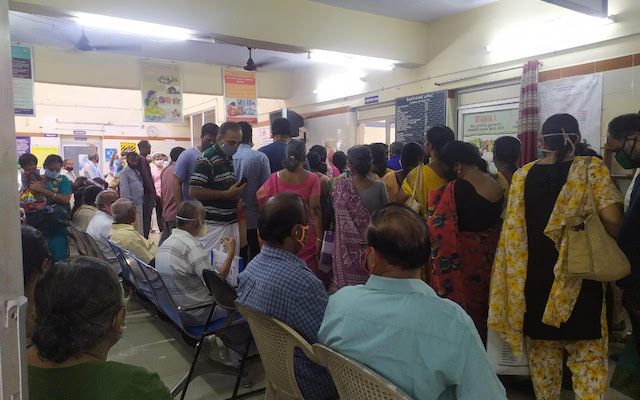 Today, April 28 the GGC-run UHC at Appu Street had an overwhelming crowd.

The nurse there mentioned that today they received enough doses of both Covaxin and Covishield. As of now,( 9 am) a total of 120 tokens were distributed for both 1st and 2nd jabs.

Though the tokens were distributed, the queue didn’t move smoothly. There was chaos as people
were made to form two different general lines not as per the vaccine shots but in a random order. In
the beginning they weren’t called as per the token numbers, but later it became quite organised
after the people there started quarrelling.

There is only one nurse who gives both the jabs simultaneously.

The people standing in the queue mentioned that they had to wait for about 45 minutes until
everything settled down.  Senior citizens said they were finding it difficult to stand in the queue for a long
time.

Every Wednesday, vaccines for babies are given at the Bazaar Road anganwadi, next to the
Thillai Vinayagar temple.

The nurse vaccinating the babies says that they chose this place as it is convenient and spacious since the UHC is now crowded with people to get their COVID vaccine jabs.