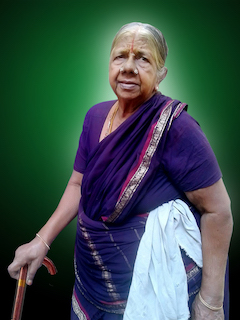 Mythili Jagannathan passed away recently at her residence in R. A. Puram. She was 90, and had liver complications.

Hailing from Rayampettai, a village near Thiruvaiyaru (Thanjavur district), she migrated to Madras in the seventies with her husband, Jagannathan, a manager at Punjab National Bank.

Mythili was a Mylaporean throughout her city life, living in Thiruvendagam Street for a few years, of which she had very dear memories. She was briefly in Dr. Ranga Road for a year too. She was among the earliest settlers in Second Main Road, Raja Annamalai Puram, during a time when there was no traffic and apartments.

She used to be a devout, God-loving personality, who frequented the Srimath Andavan Ashramam at Alwarpet and Sri Vedanta Desikar temple at Mylapore. She used to regularly attend Sanskrit classes, and go for Vedic discourses at the Vedanta Desika Hall in Mylapore. She also took shloka classes for children in the neighbourhood.

Mythili was also an ardent music lover, listening to many kutcheris of leading Carnatic artistes. She ensured that her children and grandchildren trained in the arts, and has been associated with veena player Rajeshwari Padmanabhan (who lived in Pattammal Street in Mandaveli), vocalists Seerkazhi Jayaraman and Suguna Purushotaman.

She was also a voracious reader of newspapers, insisting that she completed the day’s issue from the first page to the last before retiring for the day.

One Comment on “Obit: Mythili Jagannathan of R. A. Puram”